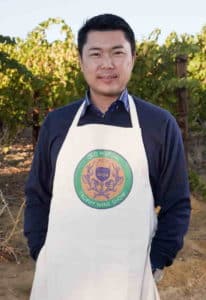 China is the world’s most populated countries with 1.3 billion inhabitants. It has the world’s third biggest GDP (at purchasing power parity exchange rates) behind the European Union and the United States and managed a mind-boggling 9% growth last year despite the global financial crisis. Hong Kong is an important gateway to mainland China and Simon Tam is arguably the region’s most important wine consultant.

Tam, out here recently to judge at the 2010 Old Mutual Trophy Wine Show, says the desire expressed by so many wine producers around the world to “crack the Chinese market” is too vague to succeed. While China might increasingly be consuming “Ferraris, Louis Vuitton handbags and Bordeaux First Growths”, the market for fine wine from more obscure wine regions is not yet well-established.

Born in Hong Kong but raised by his Chinese restaurant family in Adelaide, Australia, Tam brings a useful East-meets-West perspective to wine marketing. “Do you want to sell wine in China or sell wine to the Chinese? The wine lists of high-end international hotels are saturated. Getting the domestic populace to buy your product takes a helluva lot more work.”

According to Tam, South Africa has yet to achieve any real profile in Hong Kong. “When it comes to South Africa, there’s generally not much recall. That’s as opposed to Italy, for instance, which is associated with pizza, pasta, fashion, cars… ”

He’s bullish about South Africa’s prospects going forward, however. “If positioned well, South Africa can be propelled to stardom quickly.” And how to go about this positioning? Tam says he’s impressed with the quality to price ratio that South Africa offers. “Your wine is really cheap relative to the high cost of living in Hong Kong – that gives you some kind of opportunity to make inroads.”

Tam cautions however that volumes are going to be small initially. “You’re never going to be as prestigious as France and you don’t seem to have the marketing muscle of Australia.”

How to transcend these shortcomings? The trick is to “fabricate mystique”. Here, the wines sold on the Cape Winemakers Guild Auction have the right sort of cachet. More generally, Tam says it’s important to “tell a story”: work with selected distributors, do vertical tastings to demonstrate track record and put on food and wine tastings to sell the South African lifestyle. The one product that is strongly associated with South Africa in Hong Kong is abalone. “We worship the stuff. How about pairing it with some appropriate local wines?”

Hong Kong has a population of seven million people, and Tam makes the point that this is a market that has not nearly reached capacity. “There’s a slice of the pie for everyone. It’s French wine for special occasions but the consumer will be increasingly inclined to experiment with the product of other countries. We’re gagging for variety in the middle-upper price bracket.”

His only proviso is that entrants to the market of Hong Kong and greater China are not complacent. “The South African corporates came and went. They didn’t invest any time,” he says. “You need to know your market. There are so many misconceptions about wine consumption in the East. Like we only drink red, for instance…”