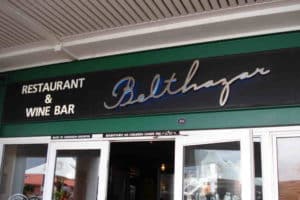 Where it all goes down – Belthazar Restaurant & Wine Bar.

It’s indicative of how gracious my wife Jane is that she let me go off to a Pinotage tasting followed by a (long) lunch this past Women’s Day. The venue was Belthazar restaurant at the V&A Waterfront and also involved were godfather of the variety Beyers Truter of Beyerskloof, as well as James Pietersen and Jonathan Steyn, both involved in the running of Belthatzar and sister operation Balducci’s.

The idea was to review the top end of the market towards generating a list of recommendations to appear in an article I’m writing for UK magazine Decanter, with the brief being to include both well established names and a few rising stars.

We tasted blind with scoring done according to the 20-point system and here’s how the wines ranked (average arithmetic scores in brackets):

Steytler Pinotage 2006 from Kaapzicht won the international trophy for best single varietal red above £10 at the Decanter World Wine Awards last year, and the 2007 was again the pick of the bunch in our tasting. Intense black in colour, it shows dark fruit and an intriguing hint of farmyard on the nose. The palate is complex, rich and full with fresh acidity and firm but fine tannins; powerful but poised.

Some more general observations: WINE magazine ran the Pinotage Champion of the Year competition from 1997 to 2003 but dispensed with it in favour of the Shiraz Challenge in 2004, on the basis that it was so difficult to find examples of Pinotage that came anywhere near greatness back then.

How things have changed. Common failings such as acetone character and bitterness not to mention brettanomyces are no longer in evidence. Fruit is very much to the fore, and there’s a sense that producers are picking optimally ripe rather than over-ripe. Equally, the use of oak seems more deft.

Because the grape contains exceptionally high malic acid, it undergoes extreme pH shifts while in the cellar which previously led to all sorts of problems, but clearly winemakers now have a better understanding of the grape’s chemistry, and are now much better able to make the necessary acid adjustments.

The examples we looked at typically have plenty of upfront fruit but then end on a savoury (as opposed to dirty) note, making them ideal with venison. Tasting complete, we duly ordered the Springbok loin…

In 1953, P.K. Morkel of Stellenbosch property Bellevue planted Pinotage on a speculative basis, the 1959 vintage from this vineyard going on to be judged best overall at that year’s...