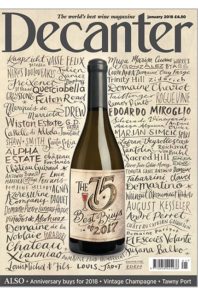 From the January issue of Decanter: A vivid illustration of how dire the drought currently affecting the Swartland is the superfluous “No Swimming” sign in front of a dam on Spice Route, any water long since dried up and its shoved-earth walls covered in grass. Spice Route, of course, is the property owned by Charles Back of Fairview fame, its establishment in 1998 generally considered to mark the beginning of the modern era of winemaking here.

In setting up Spice Route, Back was clever enough to appoint a young Eben Sadie, the talismanic figure behind the rebirth of the district. Sadie soon left Spice Route to start his own label, his Syrah-based Columella now considered one of the Cape’s foremost wines. Right now he’s deeply concerned about the drought – a 3.05ha block that he has been working on establishing since 2008 hangs in the balance. “If we don’t get some early summer rain, then we might lose the vines. I worry less about the money invested and more about the time lost.”

Nobody knows whether the drought, which started in 2015, is cyclical or part of more fundamental climate change. Heat and a scarcity of water have long been the reality of farming here but as Marc Kent of Boekenhoutskloof and one of the original masterminds behind the annual festival that was the Swartland Revolution says, “If there are great wines coming out of South East England all of a sudden, does that mean something else has to give?”

In any event, there’s an appreciation that farming methods are going to have to adapt. Mulching (to prevent loss of water and control weeds) is a hot topic and Sadie shows me a Mourvèdre vineyard where he has all of 25 different species of legumes and cereals planted as cover crop – it is spring and the canola plus other flowering plants make for a quite spectacular sight.

Equally, there is a realization that the varietal composition of the Swartland will have to change. To date, the area has been primarily associated with Syrah but many producers feel it’s set to be usurped by Grenache. “It’s a great drought crop. What we ought to do is plant lots of it, develop a 300 000 litre rosé brand now and hand over hectares and hectares of 20-year-old vines to our children,” says Ryan Mostert of up-and-coming Silwervis/Terracura.

Aside from the weather, the Swartland faces some fundamental economic challenges with a split between the old and the new, the conservative and the radical. For all the attention that the area’s so-called Young Guns attract, much of the area’s vineyards are cultivated by growers who have historically been happy to supply either the area’s large-scale co-operatives or Distell, South Africa’s biggest producer-wholesaler.

Wine-grape farming provides a notoriously bad return on investment and many operators are switching to citrus or leaving agriculture altogether. The sad part about this is that great vineyards are being lost in the process.

There has been some investment in the area with Boekenhoutskloof, Andrea and Chris Mullineux of Mullineux & Leeu Family Wines and wealthy businessman Johann Rupert all buying land along the Riebeeksrivier Rd, this collective development dubbed “Millionaire’s Mile” by one irreverent young winemaker but there is a general feeling that South Africa’s lack of political stability is preventing further outlay.

There is also some indecision about how best to approach marketing. The Swartland Revolution, which ran from 2010 to 2015, gained global attention but is now defunct. This was an annual festival conceived by Sadie, Adi Badenhorst of A.A. Badenhorst Wines and Secateurs, the Mullineuxs and Callie Louw of Porseleinberg (a Boekenhoutskloof property) which featured renowned international producers as guest speakers and attracted a devoted following during its short existence.

Why was the event terminated? “There was potential for four producers to hijack an entire region. We decided rather to hand over a legacy,” says Sadie. “When the Revolution was started, the landscape was dominated by two or three big players but now there’s more scope for everybody,” says Badenhorst. Kent of Boekenhoutskloof goes so far as to say that the Revolution as a collective mindset is still in full swing. “We have incredible leadership – interesting personalities, informed, energetic and enthusiastic.”

There are two bodies who now vie to represent the interests of the area in a formal sense, the first being Swartland Independent Producers (SIP) and the second being the Swartland Wine and Olive Route sponsored by local insurance company Santam.

SIP seeks to lay down guidelines for vineyard and cellar practices (prescribed varieties, natural winemaking) in order to express better the Swartland terroir whereas the Wine and Olive Route is a more conventional generic marketing body. Inevitably, most of the cutting-edge producers are members of SIP while those who remain outside of it accuse it of being dictatorial and insensitive to business realities. “Tension [between the two organisations] is good – it means people care. If SIP is controversial, that’s great because it’s forcing people to think,”says Craig Hawkins of Testalonga and current chairman of SIP.

For all the stresses and strains that weather, economics and politics are inflicting on the Swartland, there is still no gainsaying the quality of the wine and the feeling is that this is only going to get better.  “We’ve maturing. Back in 2010, we were all very cowboy in mentality. We didn’t own land and we used to brag about low yields. Now there’s a much more serious approach to farming – bringing health back to old vines and preparing great new sites. Most importantly, there’s a growing refinement to the wines,” says Andrea Mullineux of Mullineux & Leeu Family Wines. “We’re still discovering our potential. In 50 years’ time, we’ll have a much better idea – the best Crus will be starting to emerge. You need to grant us patience,” says Mostert of Silwervis/Terracura.

Six names to watch
Jolandie Fouché – Kloovenburg
Kloovenburg is a large, well-established property that has been producing own-label wine since late 1990s. For a long while, these were somewhat unremarkable offerings from mainstream varieties but more recently owner Pieter du Toit seems more intent in sharing in the Swartland revival and new plantings have included many of the fringe Rhône varieties. In addition, the young Jolandie Fouché, whose previous experience was a top Tulbagh cellar Saronsberg, was appointed winemaker and the wines are already a lot more exciting.

Jurgen Gouws – Intellego
If you’re a “natural wine” fan, then the wines of Jurgen Gouws are worth seeking out. He worked with the maverick Craig Hawkins at Lammershoek before that important Swartland property was sold in 2014 and also boasts harvest experiences at Domaine Stéphane Ogier in Côte Rotie in 2010 and at Matassa in Roussillon in 2012 and 2013. Don’t be misled by the rough and ready packaging these wines typically feature, it’s what inside that counts, a skin-contact Chenin called Elementis being particularly delicious.

Craig and Carla Hawkins – Testalonga
Craig and Carla Hawkins are arguably South Africa’s leading proponents of “natural wine”. Hawkins worked with Eben Sadie in SA as well as spending extensive time in Europe, in particular at Domaine Matassa in Roussillon before a stint at Lammershoek when still owned by then-girlfiend Carla’s parents where he earned a reputation for some stylistically extreme stuff. At the end of 2014, he and Carla bought a property in the north of Swartland where they now make their wine and will soon be establishing vineyard including some of SA’s first Maccabeu and Vermentino. Expect super-cool, non-conformist wines with super-cool, non-conformist labels.

Ryan Mostert – Silwervis/Terracura
Silwervis Wines was started in the spirit of “healthy rebellion” that the now defunct Swartland Revolution epitomized by financial whizz Michael Roets, wine retailer Roland Peens plus winemaker Ryan Mostert and partner Samantha Suddons. There are few as obsessive about the subject of wine as Mostert and the range is geek heaven – take, for instance, the Smiley White NV incorporating 50% of the 2017 vintage but also wine from 2014, 2015 and 2016. From Chenin Blanc, it includes portions fermented under flor and with skin contact as well as maderised. The maiden vintage 2015 of Terracura Syrah, meanwhile, immediately takes its place among the best of the district.

David and Nadia Sadie – David & Nadia
David (viticulture and oenology) and Nadia (soil science and viticulture) studied together and got married in 2009. No relation to Eben of Sadie Family Wines fame, they have quickly established themselves among the Swartland’s premier producers. Approximately half of the grapes that they work with come from the Paardebosch farm (where the winery is based) and the rest they source from other farms, all situated in the Swartland.

Jasper Wickens – Swerwer
Jasper Wickens works with Adi Badenhorst to make the AA Badenhorst Family and Secateurs ranges but has made wines under his own label since 2011, these being a Chenin Blanc and a red blend while a Syrah has more recently been added to the range, the hallmark of these being how they combine great drinkability with real complexity. He recently married Franziska Schreiber, an accomplished local grower, so should be assured of high quality fruit for a while yet!

Swartland means “Black Country”, called this by the colonizing Dutch because of the indigenous vegetation which is characteristically dark in some seasons.

Malmesbury, about 65km north of Cape Town, is the district capital and has a population of 36 000.

Largely a grain producing area, vineyards have nevertheless been cultivated here since the middle of the 18th century. On the whole, this is hot-climate viticulture with an average summer daytime temperature of 24⁰C and average annual rainfall of around 500mm.

Sand mining to devastate the Swartland?

The practice of sand mining looks set to begin in the Swartland, one of South Africa's most high-profile wine producing areas. The website Grape.co.za first broke the story here. Those...

Earlier this year, I rated the Malabar 2012, the Rhône-style red blend from Charles Back’s Swarland operation Spice Route, 90 on the 100-point quality scale (see here). Once the score...