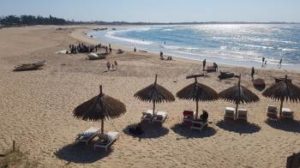 Getaway.co.za refers to Tofo in Mozambique as a “little South African Ibiza”. Luckily, our recently holiday there was out of season which meant we had the place pretty much to ourselves – a beautiful beach, balmy weather and fresh seafood every night for supper. What to drink with rock cod curry or braaied langoustines, though?

Commercial Vinho Verde, very light and slightly fizzy, quickly became tiresome so we got to interrogate closely Nederburg Lyric 2016 and Boschendal Boschen Blanc 2016, both selling for around MZN 350 (roughly equivalent to R75) a bottle.

On paper, they’re quite similar wines – Lyric 2016 a blend of 60% Sauvignon Blanc, 25% Chenin Blanc and 15% Chardonnay while the Boschen Blanc consists of 40% Chenin Blanc, 30% Sauvignon Blanc, 22% Chardonnay and 8% Colombar but the family favourite quickly emerged as the Boschenblanc on account of it being just that much more intensely flavoured and better balanced.

It, once again, caused me to ponder what is to become of Distell, owner of Nederburg and South Africa’s major producer-wholesaler. In the last 18 months, it’s offloaded prestige properties Le Bonheur and Stellenzicht and it’s an open secret that Uitkyk is on the market while at the bottom of its portfolio, 4th Street was revealed by an independent report as the “top growth brand” in the world earlier this year. Meanwhile, the company has yet to announce a head winemaker after Razvan Macici’s departure in March.

The company seems to be exiting all industry activities which are “not profitable”, a perception that senior management are doing little to alter  even if they haven’t actively confirmed or denied it, and you therefore have to conclude that we are witnessing a rightsizing or rationalisation process.

Growers have long bemoaned how Distell’s buying power by virtue of its size has kept a cap on grape prices but now there is rumour of the company inclined to take less grapes altogether and it’s going to be interesting to see what these growers do consequently.

The thing is it’s not just Distell that’s undergoing a rationalisation process but the industry as a whole. According to the most recent figures to be released by S A Wine Industry Information & Systems (SAWIS), total hectares of vineyard for 2016 stood at 95 775 ha compared to 98 597 ha in 2015, a decrease of 2 822 ha. Until 2006 the total surface had shown an annual increase but since then there has been a steady decrease totaling 6 371 ha.

For too long, the South African wine industry has relied on a “Big Brother”-type figure to provide stability and control. It was super co-op KWV from its formation in 1918 to its privatisation in the mid-1990s and it’s been Distell since then. What will happen in their aftermath? It’s time for all players in the industry – small, medium and large – to adapt a more competitive mindset but you suspect things are going to get harder before they get easier.