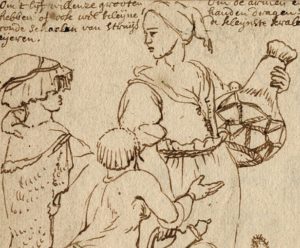 This fascinating sketch of Khoi women addressing a female colonist comes from a set of 27 drawings discovered in the National Library of South Africa in 1986. ‘Evidence suggests that the drawings were made no later than 1713, and possibly a good deal earlier,’ writes Andrew B. Smith regarding the collection (The Khoikhoi at the Cape of Good Hope: Seventeenth-century drawings in the South African Library, INIL 6250-6264).

It’s not only around Mother’s Day that I try to imagine the lives of women at the Cape during the first few decades of European settlement.

To start with, the displaced indigenous women, and in particular the one we know most about: Krotoa of the Goringhaicona, aka Eva, whose uncle Autshumato (Herry) arranged for her to spend her teenage years in Jan van Riebeeck’s household, at the Fort, working as an interpreter, negotiator and emissary (for which she was ‘paid’ in beads, copper, iron, tobacco and brandy). She spoke fluent Dutch as well as some Portuguese, French and English, and on 2 June 1664, two years after being baptised at her own request, she married the Danish surgeon Peter van Meerhof.

They did not live happily ever after. In 1668 he was killed while on a slaving expedition in Madagascar, and in 1669 she was accused by the Cape’s VOC authorities of being a drunk and ‘playing the beast at night’ (perhaps prostituting herself to try and make ends meet). Whatever the circumstances, her three children with Meerhof were forcibly removed from her care, and she was then arrested and banished – without trial – to Robben Island, where she gave birth to two more children, conceived under goodness knows what circumstances, before dying on 29 July 1674 as an alcoholic, rejected by both her own and her adopted people, not yet 32 years old.

While there is absolutely no positive spin to be put on her tragic tale, I wish Krotoa could at least have known that her great-grandson, Jacob de Vries, would end up owning one of the largest and most successful wine farms in the Liesbeeck Valley (Louwvliet/Questenburg), where he ran a popular and profitable inn (a proud tradition of hospitality still alive on the premises at Kelvin Grove Club).

Next, the women brought to the Cape in bondage, those with happier lives including Angela van Bengale who was a slave in Jan van Riebeeck’s household but later married the vrijburgher Willem Arnoldusz Basson (while her Cape-born daughter, Anna de Koning, married the Swede Olof Bergh, who later owned Groot Constantia among other properties).

Slave women born at the Cape to West African mothers, meanwhile, included Ansela van de Caap who lived at the notorious Slave Lodge and worked in the Company’s Garden until her manumission in 1695, when the German Laurens Campher brought her back to his home – Muratie in Stellenbosch – along with their three children. And I’ve already written about the remarkable Maria Everts, whose parents Anna and Evert BOTH came from Guinea, and whose children Johannes and Johanna would become master and mistress, respectively, of Klein/Hoop op Constantia and Groot Constantia.

As for women from Europe, there were only eight women (versus 82 men) among the first arrivals, including Annetje Joris, the wife of the head gardener, Hendrik Boom. Her main claim to fame (as far as wine lovers may be concerned) is that she was the first person awarded the right to sell alcohol. On 18 May 1656 she was granted permission ‘to host and house those coming and going on the passing ships’. Her qualifications? Firstly she was deemed ‘sufficiently a free woman’ (she and Boom were already living outside the Fort on land adjoining the Company’s Garden) and secondly she was ‘burdened with eight children’.

(Personally I like the fact that this counted in her favour, and not against her.)

Wives who followed their husbands to the Cape, once they’d been released from their VOC duties to become vrijburghers, included Geertjen Gerrits who arrived on 4 February 1662 with three children in tow, only to discover that her husband, Jan Coenraad Visser, had fathered a child named Margarita with the slave Lijsbeth van Bengale. A happier reunion awaited Fijtje Raderotjes who joined Jacob Cloete with their two children on 16 March 1659. Alas, only six years later, on 28 May 1665, Commander Zacharias Wagenaar recorded: ‘We heard from our chief surgeon that the wife of the agriculturist Jacob Cloete had died in the Lord. In her the poor man and his four little children have lost much.’

A surprising number of single women also made their way to the Cape, one tragic example being 24-year-old Anna Rodolphus of Grietziel who arrived disguised ‘as a soldier in male attire’ on 16 December 1659, got engaged to Gysbert Arensz of Bommel on Christmas Eve, but died of dysentery on 6 January 1660 before the marriage could take place; a happier example being 22-year-old Beatrix Weijman of Utrecht who arrived on 15 August 1661 and married Jan Pietersz Louw (of the above-mentioned farm Louwvliet) just eight days later (their marriage lasting until his death in 1691).

What circumstances drove these women to leave Europe? I suppose some of the ‘older’ (20-something) spinsters simply felt that their marriage prospects were bleak, but a few were probably escaping dubious pasts. Certainly the records show that Catharina Jansz van den Bergh, who married leading winemaker Jacob Cornelisz van Rosendael on 9 November 1664, was rumoured to have worked as a prostitute in Amsterdam after her father was imprisoned in the Rasphuis…

Then of course there were the weesmeisies – orphan girls sent to the Cape by the Dutch East India Company as potential wives for the vrijburghers. ‘Working with unmarried men is very unstable and rests but on loose screws,’ wrote Van Riebeeck in May 1659, asking the Lords XVII to send over at least 20 ‘lowly maidens’ who wouldn’t be afraid of hard labour.

Simon van der Stel echoed this call in 1685, asking for 30 to 40 women familiar with farm work, but in the end there were only eight who arrived from Rotterdam on 4 August 1688. (South Africans with surnames including Van Deventer, De Vos and Zaaiman/Saaiman can trace their ancestry back to Ariaantje Jacobsz van den Berg, Wilhelmina Adriaanse de Wit and Engeltje Cornelisz van der Bout.)

Since celebrating 50 years of Pinotage at Meerendal a few weeks ago, one woman I’ve been trying to find out more about was the Widow Meerland who owned the Durbanville farm in the early 1700s and was ‘reckoned among the principal suppliers of wine’ at the Cape by French minister and naturalist Francois Valentijn after his visit in 1714.

As Giessendam in the Netherlands was/is located fairly close to Wageningen, where the Botmas were said to be landed gentry, my feeling is that this was a marriage arranged by Jan Botma’s father, Steven, one of the first and most senior vrijburghers (placed in charge of the first communal land grant, Hollandsche Tuin/Steven’s Colony), and also one of the very few who could read and write.

This marriage was childless, but Widow Botma was still young enough to have four children with Van Meerland (Petrus, Jan Bernhardus, Abraham and Maria). In 1701, Van Meerland bought one of the oldest and biggest farms in the Liesbeeck Valley (Ekelenburg near the Rondebosje), and in 1702 he was granted Meerendal.

The records show that the Van Meerlands were reliable producers of wine, their deliveries including four leaguers (about 2,640 litres) for shipping aboard the Munster and the Schoonderloo in June 1705, and four leaguers aboard the Blois and Huis te Loo in early 1706. However, Jan van Meerland was one of the ‘seditious ringleaders’ who showed ‘mutinous conduct’ towards governor WA van der Stel of Vergelegen fame, who therefore deported him to Holland in March 1706, along with Henning Huysing, Jacobus van der Heyden, Ferdinandus Appel and Pieter van der Byl (‘the chief heads and leaders of this mutinous and rebellious troop’), in order for them to voice their grievances and face the treason charges now brought against them.

Unfortunately Van Meerland died en route but, it seems he had given his wife full authority to act for him in his absence – and her status was no doubt boosted by his death, which must have seemed almost martyr-like following Van der Stel’s dismissal in 1707. By 1712 Widow Meerland had not only doubled the size of Meerendal through an additional land grant, but she had also entered the loan farm market, making eight applications between 1710 and 1714 for farms at the Mosselbankrivier, Koeberg and at Vishoek, Hottentots Holland (present-day Gordon’s Bay).

By the time Valentijn visited the Cape in 1714, he could report that ‘she derived fully 100 leggers [56,300 litres] of wine from her property’ and he listed her alongside the Botmas (her father-in-law and his two younger sons), Henning Huysing of Meerlust and Guillaume Heems of Bosheuvel as those who had ‘amassed much money in a few years by their diligence’.

Her third marriage, on 3 December 1713, was to Johannes Swellengrebel, born in Moscow in 1671, a bookkeeper who’d rapidly risen through Company ranks at the Cape to become a Council of Policy member. In 1716, however, he was forced to resign following complaints about his extensive land ownership and large wine production. This was not permitted for high-ranking officials after the WA van der Stel affair – and was almost entirely acquired through his marriage to a formidable woman.