SA Wine History: Napoleon’s favourite Cape wine – and did it kill him? 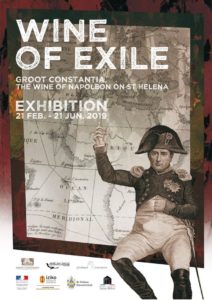 Honan was in South Africa to launch an exhibition entitled ‘Wine of Exile: The wine of Napoleon on St Helena’ that is open to the public until 21 June 2019, featuring exhibits from the collections of Iziko, Groot Constantia, the Napoleon Foundation, the Government of St Helena and the French National Domains of St Helena.

The exhibition aims to show how Napoleon Bonaparte – former emperor of France, king of Italy, protector of the Confederation of the Rhine (in short, the most powerful man on earth) – became partial to the lusciously sweet wines of Constantia while in exile on the remote South Atlantic island from 1815 until 1821, to the point of desiring nothing else on his deathbed.

And speaking of his deathbed, the French Ambassador to South Africa, Christophe Farnaud, couldn’t resist raising the conspiracy theory that Napoleon did not die (only) of stomach cancer, as per his autopsy report, but also from arsenic poisoning. ‘Perhaps the Constance was not only a wine of exile but also a wine of death,’ he said, alluding to the fact that while all other food and drink was shared among Napoleon’s large entourage, the Constantia was reserved for his exclusive enjoyment, and therefore the means by which arsenic would probably have been administered.

For the record, it was not.

Although modern tests on hair shaved from Napoleon’s head post mortem revealed arsenic content up to 100 times the ‘normal’ amount, subsequent tests on hair samples dating all the way back to his childhood showed similarly high levels. Horrifying as it might seem to us today, in those days arsenic was widely used as an ingredient in paints, cosmetics, hair tonics, lice treatments, medicines and even the preservation of food…

Had Napoleon been poisoned on St Helena, he would have lost weight rather than regularly needing his trousers widened. Researchers modelling his trouser sizes with control data from a cohort of 121 male European patients established that the short-ish military man who had always exercised regularly, eaten on the go and drunk in moderation (preferably Chambertin, mixed with a little water) gained almost 10kg after his arrival at St Helena, his weight only plummeting from 91kg to 79kg in the last year of his life as cancer took hold.

Living a suddenly sedentary life of stultifying boredom, it’s hardly surprising that Napoleon got fat. According to Jacques Chandelier, his cook at St Helena, his breakfast consisted of ‘sorrel pottage or any other refreshing pottage; breasts of mutton, boned and well grilled, served with a clear gravy; a roast chicken or two griskins [pork loins], and sometimes a plate of pulse’. For dinner, he ‘had a pottage, a remove, two entrées, a roast, and two side dishes of sweetmeats or pastry’.

His favourite savoury dishes reportedly included fowl, roasted or fricasseed in Champagne, and pullets minced ‘à la Marengo’, ‘à l’Italienne’ or ‘à la Provencale’ (but without garlic). Above all, though, Napoleon enjoyed sweet pastries, such as vol-au-vents, petites bouchées à la reine and little cakes of macaroni prepared in various ways. ‘The only fruit of any value [to him] was the banana,’ wrote Chandelier. ‘This was excellent in fritters or iced with rum.’

That Napoleon clearly had a sweet tooth might explain his love of luscious Constantia, but he was by no means alone or even the first. Frederick the Great (King of Prussia from 1740 until 1786) was a famous royal fan, as were Louis XVI and Marie Antoinette. By the time of Napoleon’s exile, however, Constantia arguably was at the height of its fame. Published in 1816, pioneering wine critic André Jullien’s encyclopaedic Topographie de Tous les Vignobles Connus contained the following entry: ‘The highly renowned wines of Constance are harvested in two adjacent vineyards, one called Higher, the other Lower Constance. Each of these proprietaries pretends superiority over the other, but in fairness both of them, mere metres apart, provide some of the best liqueur wines in the world, ranking immediately after those of Tokaj.’

(See here and here for more on these two producers of legendary Constantia wine.)

So in early 1816, when Napoleon’s aide on St Helena, Emmanuel, the Comte de Las Cases, was banished to the Cape after being caught smuggling letters to Europe, the first thing he did was arrange for some Constantia to be sent to Napoleon.

‘I was well aware that the Emperor attached but little importance to luxuries of any kind,’ he simpered in his memoirs. ‘I, however, ordered some of the best Constantia and Bordeaux wines, coffee, liqueurs, oil, eau de cologne, &c. I mentioned that, if they were not of the most superior quality, I would decline purchasing them.’

Every year thereafter, one or two leaguers (563 or 1,126 litres) of Constantia were sent in wooden casks to Longwood House, Napoleon’s residence on St Helena, where he drank up to a bottle a day (on top of the Champagne, Claret, Vin de Grave, Madeira, Tenerife, Cape Wine, ‘Cyder’, malt liquor and other drinks that were shared among everyone).

‘I had the inexpressible satisfaction of learning that the Constantia wine, in particular, had pleased the Emperor,’ wrote Las Cases. ‘It was reserved for his personal use, and he called it by my name. In his last moments, when rejecting everything that was offered to him, and not knowing what to have recourse to, he said–“Give me a glass of Las Cases’ wine.” How gratified I was to hear of this!’

Her Excellency the Governor of Saint Helena, Ascension and Tristan da Cunha, Lisa Honan, encourages more South Africans to visit the remote island where Napoleon died, located almost 2,000 kilometres to the west of the African coastline.

‘Come and drink Grand Constance where it really should be drunk,’ she says. ‘On St Helena.’

In the meantime, the Wine of Exile exhibition at Groot Constantia is worth a visit. Here’s a teaser courtesy of SABC News.

Las Cases, Emmanuel Auguste Dieudonne, comte de: My residence at the Cape, being an extract from volume IV of Mémorial de Sainte Hélène: Journal of the private life and conversations of the Emperor Napoleon at Saint Helena, with introduction and notes by OH Spohr (AA Balkema, Cape Town, 1970)

The Cape Fine & Rare Wine Auction (CFRWA) takes place this coming Saturday and there’s a bottle of Grand Constance 1821 up for grabs. ‘A treasure of this calibre presents...

It’s been quite a while since I was a proper wine tourist, anonymously exploring a route for the sheer joy of it. Mostly this is because my job over almost...