SA Wine History: On Unsustainable Wine Prices – Then and Now

At the recent 2019 Vinpro Information Day, chairman Anton Smuts said wine producers are accepting prices that are ‘too low’ – far lower than what their overseas counterparts get paid, and totally unsustainable given that production costs have risen by 7.4% annually over the past decade.

Nearly half of packaged wine sells locally for less than R30/litre, revealed Smuts, with some 14% of producers still selling their wine in bulk for less than R4.50/litre (while water sells for R5-R6/litre).

‘Producers need to invest about R13bn to replace old vineyards over the next 10 years,’ he added. ‘How will we achieve this with below par income? We need to negotiate for sustainable prices.’

Those words took me back over three centuries.

As I wrote in an earlier column, the VOC’s 10th commander (and later its first governor) at the Cape, Simon van der Stel, ‘frequently deplored’ the quality of local wine to his superiors, the Lords XVII, after his arrival here in 1679. It’s little wonder, therefore, that visiting commissioner Ryklof van Goens objected to the price that the VOC was paying vrijburghers for their wine – 80 Rixdollars per leaguer (about 563 litres).

Even though the VOC could sell Cape wine for between 90 and 160 Rixdollars per leaguer on auction in Batavia (in May 1681 it was reported that one leaguer had even reached 210 Rixdollars), Van Goens no doubt saw great profit-earning potential in Cape wine and duly proposed that a mere 40 Rixdollars per leaguer should be paid for wine that was ‘suyver lieffelyk’ (pure and lovely), 35 for the ‘naast beste’ (next best) and 20 for wine that was ‘waterachtige ende slappe’ (weak and watery).

These prices were set on 20 January 1684 – and pretty much ignored by the vrijburghers because demand from the local market meant that most of their wine was pre-ordered, even before harvest, even at 80 Rixdollars per leaguer… 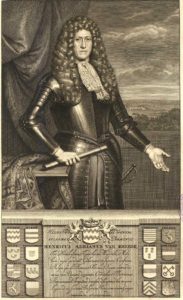 But the next VOC bigwig to visit the Cape in mid-1685, Hendrik Adriaan van Rheede tot Drakenstein, was having none of this local supply-and-demand nonsense. The result of his inspection was the resolution of 21 January 1686 which obliged the vrijburghers to sell all of their wine to the VOC for the staggeringly reduced average price of 15 Rixdollars per leaguer.

The only reason the fledgling ‘industry’ survived was due to exceptional harvests – at least in terms of yield – in 1686, 1687 and 1688. Van der Stel reported on 26 April 1688 that he didn’t have cellar space for all the wine, of which he had ‘a stock of 69 leaguers, in spite of our exportation of 14 to Ceylon and 4 to Mauritius’.

In terms of quality, however, it goes without saying that most of the wine farmers stopped making any effort whatsoever to improve their wines – a huge blow to Van der Stel, who had been pushing for (and achieving) better wines since his arrival at the Cape.

With this in mind, he repeatedly asked the Lords XVII to raise the price for Cape wines, and on 17 December 1690 they finally agreed that 20-25 Rixdollars should be paid for the ‘getrede’ (gently foot-trodden) wine and 15-20 Rixdollars for the ‘geperste’ (more heavily pressed) sort.

On 22 June 1692, Van der Stel craftily argued that the price of 25 Rixdollars had immediately had such a ‘stimulating’ effect on quality improvement that a further increase to 30 Rixdollars should be considered.

The Lords XVII agreed to this on 30 December 1693, and by the time they were demanding to know why there wasn’t more Cape wine available in Batavia, Van der Stel was able to respond, rather acerbically, that he would have been able to send a far greater quantity of better wine by now (9 May 1695 being the date of his letter) had the low price not compelled so many farmers to turn away from winegrowing and plant other crops instead.

Does that sound familiar to anyone?

But luxury pricing (then and now) is a story for another day.