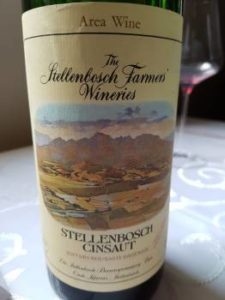 How prominently is Cinsaut set to feature in the South African wine industry’s future? Yesterday, a panel discussion and tasting of some leading examples jointly hosted by Wine Cellar and WOSA (watch here). Based on my experience of the modern incarnations, it seems that it generally makes “smashable” wines – it is very much on trend in the sense that it provides a fine accompaniment to tapas served in a hipster wine bar but is it capable of being South Africa’s trump card when it comes to red wine? Can it lead to profound rather than just immensely appealing wine?

In a similar vein, are we expecting too much of it as a single-variety wine and is not better suited as a blending component? There is a myth taking root that it was the secret ingredient in many of the great wines of the 1960s and 1970s but while it certainly played a role, there is evidence that so did many other varieties – see here and here.

In reaction to the above, Eben Sadie who makes a Cinsaut called Pofadder as part of his Old Vine Series had the following to say: “It’s very difficult not to take a punt on a grape that carries terroir so heavily. My intuition is that we must trust a grape that is so articulate of the soil. The only other grape I know which is like that is Pinot Noir.”

Sadie conceded that success wasn’t guaranteed but producers were compelled to “entertain the thought” and it would only be after 20 vintages of wines made off old vineyards that we would be able to tell for sure. What gave him encouragement was the “phenomenal stability of tannins” that the wines he has made to date exhibit, suggesting that Cinsaut was exceptionally age-worthy.  He added that South Africa needed to be less dependent on the “big five” varieties: “We have the most the most diverse flora in the world, so why not a diverse grape portfolio?”

Ryan Mostert of Silwervis and fellow Cinsaut advocate said that he felt that in his experience, Cinsaut looked “completely at home” in the South African context. “While Syrah will be sweating in the heat, a Cinsaut block with a bit of age looks comfortable – you can pick the grapes on a 35⁰C day and they will still have crunch. Also, it makes wines that taste unique from site to site. I think it’s here to stay.”

Why Cinsault is becoming a thing (again)

How fashions change in wine. Platter’s 2008 lists all of five examples of Cinsault, the three reviewed being from Landskroon, Mac’s Hill and Culemborg while Perdeberg and Welgegund had just...

The biggest insight to arise out of a recent Cape Winemakers Guild technical tasting on Cinsaut presented by Etienne le Riche of Le Riche Wines is that there is no...