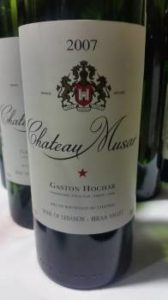 The biggest insight to arise out of a recent Cape Winemakers Guild technical tasting on Cinsaut presented by Etienne le Riche of Le Riche Wines is that there is no need to decide whether the variety works better on its own or in a blend but rather that these are two very different propositions.

Some general observations: Single variety Cinsaut is on trend because of its ability to make easy-drinking, lighter bodied wines. The Landskroon 2015, while by no means profound, was impossible not to like and a complete bargain at R44 a bottle from the farm.

The question is: How much to expect from single-variety Cinsaut? The argument can be made that early adopter wine-geeks are over-estimating its worth simply because it’s not yet mainstream. In this regard, the Badenhorst Kalmoensfontein Ramnasgras CWG  2012 as sold on the 2014 auction where it fetched an average price of R2 773.33 a case (or R462 a bottle) was drinking well enough but lacked true complexity (score: 88/100).

On the other hand, Turley Bechthold Vineyard Lodi 2015 (from a block planted in 1886) and The Old Vine Series Pofadder 2015 were my best of the bunch and strikingly good (both 92/100). Best to drink modern Cinsaut earlier rather than later?

The last flight of Cinsaut blends was a treat, in particular the Musar 2007 which was detailed, balanced and very, very long (95/100). Not far behind it came the Leeu Passant Dry Red 2015, a blend of 35% Cabernet Sauvignon, 34% Cabernet Franc and 31% Cinsault – this is a wine which has attracted much acclaim since its launch earlier in the year and it was reassuring to see it show so well in this context (score: 93/100).

Around 120 years ago – let’s say in 1900, to fit with the formal record, though that was made later – a vineyard was planted on the outskirts of Wellington,...