Why Cinsault is becoming a thing (again) 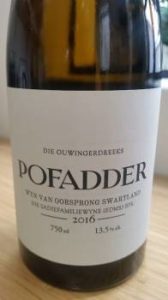 How fashions change in wine. Platter’s 2008 lists all of five examples of Cinsault, the three reviewed being from Landskroon, Mac’s Hill and Culemborg while Perdeberg and Welgegund had just discontinued their respective versions. Jump forward to 2018 and this edition makes record of some 50 examples, Sadie Pofadder 2016 achieving the guide’s ultimate accolade of 5 Stars.

Cinsault is, of course, of great historical significance in the Cape having been grown here since the middle of the 19th century and was at one point South Africa’s most widely planted variety, occupying nearly a third of the vineyard, used for everything from brandy, through rosé, to sweet, dry and fortified wines as Tim James points out in his excellent book “Wines of the New South Africa: Tradition and Revolution” (University of California Press: 2013).  In another article, James relates that “Cinsault declined in the years after World War 2, and chenin increased: a chart of their plantings makes a pleasing X shape, the crossing point occurring in 1968, when each had about 22% of the national vineyard”. By 2000, the red variety had fallen to just under 4% of total plantings (3 533ha) and by 2017, to just under 2% (1 759ha).

What’s interesting, however, is that at the end of last year there was still more Cinsault in the ground than Pinot Noir (1 182ha) or Cabernet Franc (820ha) not to mention Grenache or Mourvédre and the revival, admittedly off a small base, does appear to be underway.

I think the argument can be made that a big part of the reason why Cinsault – both as single-variety wines and as a blending component – is starting to feature again is precisely because of its long local history. Post political transformation, we saw plantings of varieties with strong international reputations spike – Cab, for instance, went from 8 824ha in 2000 to 12 325ha in 2010 but subsequently declined to 10 360 ha last year while Merlot went from 4 888ha in 2000 to 6 497ha in 2010 but has now fallen back to 5 460ha.

With South Africa gaining access international markets after sanctions were lifted, the thinking was surely to replicate what had succeed elsewhere. As our top-end winemakers have grown more self-assured, though, there is a realization that old bushvine Cinsault can give our wines a point of difference and help forge an authentically and non-replicable South African identity for them. When it comes to the best single-variety versions, Sadie Pofadder is joined by Badenhorst Ramnasgras, Blackwater Hinterland, Naudé Old Vines, Rall and Van Loggerenberg Geronimo.

The variety also seems to have a useful role to play in blends – it is perhaps not surprising that it works when combined with Shiraz and other varieties associated with Southern France given that this region is also its traditional home but perhaps even more exciting is when it’s combined with Bordeaux varieties à la Rustenberg Dry Red of the 1970s which saw approximately 70% Cabernet Sauvignon with 30% Cinsault.

Here Leeu Passant Dry Red as made by Andrea and Chris Mullineux is the most serious (and expensive) to date, the current-release 2016, including 37.5% Cabernet Sauvignon, 37.5% Cabernet Franc and 25% Cinsault and selling for R1 005 a bottle from Wine Cellar. Richesse from Le Riche in Stellenbosch  is not to be overlooked, however, the current release 2015 incorporating 18% Cinsault along with 41% Cabernet Sauvigon, 13% Petit Verdot, 11% Merlot, 8% Cabernet Franc and 9% Malbec  and at R155 a bottle from Wine Cellar, not entirely out of reach.

And now Fairview also comes to the Cinsaut/Cinsault party with this 2016 from Paarl vineyards over 30 years in age, winemaking involving fermentation in open-top oak fermenters, 20% whole bunch...

Cinsaut/Cinsault’s shift from fringe to mainstream continues apace with the Cellar Selection 2016 from Kleine Zalze selling for R67 a bottle. From a combination of Darling and Paardeberg grapes, the...

How prominently is Cinsaut set to feature in the South African wine industry’s future? Yesterday, a panel discussion and tasting of some leading examples jointly hosted by Wine Cellar and...