I spent a good chunk of last weekend – or so it seems in retrospect – tasting wines from a handful of the Cape’s newest producers. A privilege in the context of our exciting times, you might think – and that’s absolutely right for the most part. I was tasting with the redoutable Cathy van Zyl, and these were some of the wineries making their Platter’s Guide debuts in the 2016 edition (“newbies”). Most wines, as most people know, are basically tasted by individual Platter tasters (and referred to others for second opinions quite frequently), but new producers’ offerings are tasted by two, in order to at the outset hopefully minimise the effects of personal idiosyncracies of taste.

Incidentally, I’m aware that there are those who imagine that “sighted” tasting consists mostly in checking a wine’s established reputation and rating it accordingly. Yes, well, that’d be nice. But what about wines with no track record? A number of now-famous wines in fact started acquiring local and international reputations with their first Platter appearance (i.e., the taster had no track record to go by – but clearly got it right). Boekenhoutskloof Syrah, Sadie Columella, Mullineux Straw Wine, Botanica Chenin Blanc and Alheit Cartology are just some that gained five stars on their maiden outings – generally well before any great reputation had accrued to the winemaker.

Most of the 26 wines from 10 new producers that Cathy and I sampled were at least good, but I’m not going into details here. I did think, however, as I idly assembled statistics, that the shape of the offering was interesting – and, I’m guessing, not much divergent from the overall pattern of new entrants to this fine, exciting and often perilous game of making and selling Cape wine. 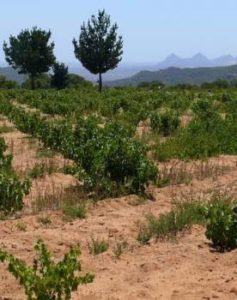 The largest category, for example, and a uniformly very good one, was chenin blanc, with seven wines, and there were also two chenin-based blends. An unsurprising predominance this, perhaps, as it is arguably old-vine chenin that is the icon of the Cape wine revolution. And the commonest area of origin overall – what else but Swartland? Seven the number here too, but certainly not a precise overlap with chenin. Stellenbosch was only just behind – and two wineries from Franschhoek made that area also particularly well represented.

In fact, probably the most gratifying aspect of the whole tasting is that the vast majority of these wines declared specific origins, testifying to a commitment to expressing terroir. Even the one Coastal Region wine also offers itself as terroir-specific, and the Western Cape example was from Swartland and Voor-Paardeberg – a marriage blessed by heaven, if not the Wine and Spirit Board.

There were, by the way, pretty near equal numbers of red and white wines in our line-up. The reds were much more spread out in terms of grape variety, however. A common perception would suggest that if there’s a red equivalent of chenin in the new South Africa, it is cinsaut. There was, happily, one in our line-up, as well as a cinsaut-cabernet blend from Stellenbosch (an early harbinger of that important emergent category). Two Swartlandish-style red blends, two mourvèdres (twice as many as the total number of mourvèdres in Platter ten years ago), a pinotage and a shiraz. And three pinot noirs testified to the huge growth in interest in that category on behalf of producers and consumers alike.

This was, obviously, not a scientific sampling of what is new in South African wine, but I do believe there its news is nearly as much typical as it’s gratifying.