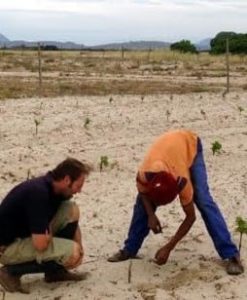 It doesn’t look impressive at first glance, to the ignorant eye at least: if this is a vineyard which might influence some significant aspects of the future Cape wine industry, then I hope there’s a Plan B. A fenced few hundred square metres of white sand, planted with what looks like short dry sticks, some of them bravely flourishing a fistful or two of bright green leaves. And as we get up close to them we see, to Eben Sadie’s dismay, just why there isn’t more green: these infant vines are infested with hungrily munching caterpillars.

It’s late afternoon, just inland from St Helena Bay on the Atlantic coast, the far north of the Swartland, where Sadie takes the grapes for his Skerpioen field blend of chenin and palomino from adjacent vines growing in this chalky sand, with outcrops of hard limestone here and there. He’s brought me mostly to show me these recently planted little vines. His bakkie can’t make it through the sand, so farmworker Esau lets us perch on the back of his tractor for the last few hundred metres.

What’s special about the vineyard is that it comprises a number of unusual varieties, for the Cape at least – though agiorgitiko and assyrtiko are scarcely rare in Greece, nor graciano and mencia in Spain; there’s also the likes of albanello, grillo, cataratto “and some of the usual suspects”, says Eben. The cuttings come from the “clonal garden” at the Nietvoorbij institute in Stellenbosch, from material brought into the country many decades back, a lot of it diseased and needing to be cleaned up (a comparatively quick process), or replaced by new imports (a lengthy process) – if it looks likely to be worth the effort, of course. If the wine produced off vines in even this hampered condition looks promising, that’s an argument for somehow getting clean vine material.

There’s nothing really obvious in this programme for Eben – at least not in the short-to-medium term – and it’s costing him time, money and effort. So why is he doing it? There’s clearly a real element of curiosity about how these varieties work here. “I just want to know!” he says. And the effort needs to be made, for the sake of the future of winegrape-growing in the Western Cape. “Even if not anything works, I can sit on my stoep one day and say – well, at least I tried.”

In fact, with new involvement by Vititec (the major vine supplier), this whole project is rapidly growing into a much larger, more scientifically controlled one. Older material, including cuttings from well-established local vines, and new imported material, will be planted in different terroirs (notably different climatic conditions) and all aspects carefully monitored. Climate change threats (and perhaps opportunities) are one important factor in understanding the need to be prepared for the future by having a wider range of properly understood varietal options – it’s very possible that the varietal make-up of the Cape vineyard could look substantially different in fifty years, or even less.

Meanwhile, I hope that Eben Sadie’s little experimental vineyard up the West Coast is thriving. We knocked off and trampled into the sand as many of the pernicious little caterpillars (“wurmpies”, as Amos called them). But early the next morning, Eben once again made the two-hour journey from Malmesbury, this time bearing something toxic to spray on them – and give them, as he said, a real headache.