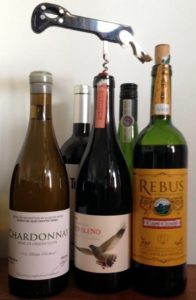 The question of wine closures always hovers. I should have mentioned the absence of screwcaps when I last week wrote about the possibly significant patterning evident in the wines of a reasonably substantial number of new wineries I tasted (see here). Going by that unscientifically-generated sample, screwcaps are not much entering the thoughts of the Cape’s new producers – something corroborated by my general impression of how the avant-garde presents its wines.

Nor is most of the quality-oriented sector of the traditional producers rushing to steel. Though without facts and figures to hand, I’m sure that screwcaps are making a little headway at the smarter end of Cape wine, especially with white wines, but only a little, I’d say – certainly going by the wines that have been passing across my work-desk and dining table this year. Including during the current Platter’s tasting season – somewhat to my regret, I confess, though from a very mundane perspective: however one might feel about the unveiling of individual wines, it’s unquestionably so much easier to deal with screwcaps when confronted with larger samplings that must also be resealed.

And yet. Though last weekend’s tastings were in line with my generalisations about the rule of cork among the avant-garde, a fascinating small selection of five new-wave chenins arranged itself for comparison, and their closures tell a more complex, and to me surprising, story. Five is, of course, likely to be a pathetically unrepresentative sample – something analogously pointed to by the fact that three of these wines either call themselves “Steen” rather than chenin blanc, or at least strongly allude to the old and now sadly much-abandoned local name for chenin.

Anyway, three of these chenins had screwcaps: two Swartland examples – Reverie, made by Jacques de Klerk, winemaker at Winery of Good Hope, and Klipspringer, a new wine from Fledge & Co, the quirky (and, I increasingly think, brilliant) team of Margot Nel, Boplaas winemaker, and Leon Coetzee. And one from Stellenbosch – Hoeksteen, also from Fledge & Co. Two had corks in different styles: a beautiful pale integral cork on Bryan MacRobert’s Swartland Steen, and a composite on Mount Abora Koggelbos.

The Mount Abora case is quite interesting. The composite stopper, like that on their red blend The Abyssinian, has rather more writing on it than most closures do: “This closure”, it reads, “is made from actual cork. We are passionate about everything we do and use this closure to guarantee the freshness and purity of our wines”. Presumably by “this” they mean the allusion to the composite nature rather than the use of cork itself – which we all know does nothing in itself to guarantee freshness and purity.

The third Mount Abora wine, Saffraan, which is doing as much as any to justify the current fuss about the South Africa cinsaut revival, has a screwcap, however. No comparable explanation is given. The screwcap says nothing (except look vaguely appropriate to the funky label). It just tinkles merrily and trivially when it falls to the floor.

Overall, it’s not just the reluctance of the avante-garde and the conservative arrière-garde to turn to screwcaps that I’m noticing. More and more winemakers in South Africa seem to be turning to “technological”, composite corks (especially Diam), away from rather than the pure, integral ones. A compromise? Screwcaps aplenty, though – especially for aromatic whites; and virtually none of those nasty extruded plastic things, except at the lower end (though I believe the quality of them has risen, if not the aesthetics and the unfortunate reputation).

As to how the inserted corks are covered: Traditional metallic, occasionally plastic, capsules rule, of course, but for smaller runs of avant-garde wines, wax-dipping is a cheaper alternative – with the benefit of also giving a pleasantly hand-done-artisinal feel. Gaining in popularity, I’d suggest, are strips of printed paper running over the top of the cork and down two sides of the neck. These do rather irritatingly stick to the glass mouth of the bottle I’ve found. But I can live with that too.