More years ago than I like to remember, to celebrate my 21st birthday, I bought half a dozen bottles of a local sparkling wine called Here XVII Souverein. It’s not that I haven’t had a party or two since then, but I think I can honestly say that that was the last time I actually spent money on bubbly – though I’ve certainly drunk quite a bit. It seems to be (internationally and locally) an amazingly successful category, and I know there are serious aficionados of the stuff, especially champagne of course, but I’ve never been convinced – and, since I’ve become fussy, at the price point I would invariably find more to interest me in still wines.

As to champagne – while I have little more than disdain for the 25-plus million bottles of basic Moët churned out annually and selling for an absurd price in every supermarket, I confess I have been engaged by some excellent bottles. I remember when I first made acquaintance with Salon and I realised that occasionally champagne could be great wine (forget about the irrelevant bubbles). News trickled to my ignorant ears about the rise of some artisanal, terroir-oriented producers in Champagne over the last few decades, reportedly making fine and deeply interesting wines, but I paid little attention.

So, when a friend lent me a book on champagne – specifically on this “grower” movement in more or less philosophical and winemaking opposition to the grandes marques – I opened it (a few weeks later when I had nothing better to do) with little expectation of interest. But how wrong I was. It’s a brilliant and appealing book, and the story it tells is fascinating and compelling – leaving me thirsty to try some of the wines that are its subject. 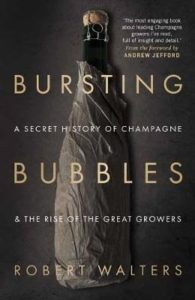 The book is Bursting Bubbles: A Secret History of Champagne and the Rise of the Great Growers (published in Australia by Bibendum; it’s available at loot.co.za for R355). The author is Robert Walters, an Australian wine importer. It seems he was once as unconvinced as I by champagne, but had his epiphany when given a glass of one of the great grower wines: Larmandier-Bernier’s Terre de Vertus. He says: “I was floored. What I had in my glass was not Champagne, or at least not Champagne as I knew it. Rather, this was a remarkably fine, complex wine….”

Walters went on to explore and discover that champagne could be – is – greater than he’d realised, more than “simply a luxury beverage”. In his book he takes his reader on that journey too. There’s some history and a great deal of demythologising involved – though it must be said that the book is not a simple exercise in Grande Marque bashing nor an uncritical celebration of artisanal (often bad) winemaking).

Mostly, of course, it’s a tale of visits to some of the great growers and accounts of their determination to express their parcels of land in their champagnes. But, even given Walters’ lively, unpretentious prose, that could make for somewhat dull reading to those who, like me, don’t know the landscapes or the producers. Keeping things lively, his recounted travels through Champagne are regularly interspersed with bubble-bursting accounts of some of the myths that have become associated with “official” champagne culture. (Myth I: “Dom Pérignon was the father of Champagne”; Myth VI: “Blending is better”; Myth X: “Smaller bubbles are a sign of high-quality Champagne”.)

Given that the sparkling wine world, not least in South Africa, is in the thrall of champagne, I reckon it would be of great advantage to genuine progress in the Cape’s generally admirable bubbly industry if local producers read this book. (Terroir is not a word I hear from bubbly producers, for example; and surely there’s no need in sunny Robertson or Stellenbosch to pick unripe grapes and be obliged to compensate by a syrupy dosage?)  And if wine-lovers read also read Bursting Bubbles, they will learn a great deal and have a lot of pleasure doing so.