Tim James: Carinus and the way forward for Cape wine

One can plausibly understand the development of South Africa as a quality wine producer by looking at the wine industry’s progressive movement away from farmers supplying co-ops and big merchants with grapes to an increasing number of private wine producers, many of them working from vineyard to cellar.

A crucial date is 1973, when estate legislation came into existence as part of the Wine of Origin regulations. That was the year when, for example, Kanonkop first bottled wine under its own name. By the end of that decade, there were 56 estates. In 1993, just before the political change which ushered in the modern Cape wine revolution, there were 170 private wine cellars, 70 “producer cellars” – co-ops and former co-ops – and four producing wholesalers. Now there are 493 private wine cellars, 48 co-ops (following amalgamations and a few closures and privatisations), and 27 producing wholesalers. Importantly, there are also plenty of small wine producers, including some well-known names, making wine under their own labels in rented space.

A great many of the country’s most famous wines come from grapes which 20 years ago went into the vast tanks of the co-ops and merchants. Nearly all of the best wines did so 50 years ago (and of course the merchants, if not the co-ops, produced some fine wines back in the mid 20th century.) That is the progress that has been made, and it is vital that the momentum continues if the Cape’s reputation is to continue to rise.

More and more grape farmers are supplying ambitious winemakers with fruit, often working with those winemakers in their vineyards according to a programme for producing higher quality fruit. More than a handful are also producing wines under their own labels – sometimes a bit tentatively, sometimes with more confidence and on a bigger scale. One of last year’s most promising new labels, for example, Mont Blois from Robertson, is one such.

Another fine example was a collaboration between two farmers named Carinus (but distantly related) – Danie in Stellenbosch and Hugo in the Swartland (each, significantly, the younger generation on his property). They’ve recently released their second vintage of the three Carinus Family Vineyards wines, again made by Lukas van Loggerenberg. I was hoping for additions to the range, but not yet – Danie says, though, that “we do have some interesting stuff fermenting in the cellar. Also, myself and Lukas are doing a wine called Dancho Luka”. I look forward.

I have already written briefly about the very pleasing Carinus Syrah from Stellenbosch, and have since been enjoying the two Swartland chenins. Under screwcap is the straight Chenin Blanc. It’s not cheap at about R140, but worth the money for the quality and, just possibly, for the note on the display label describing it as “Made from old vines grown next to the long & winding gravel road that leads to redemption and enlightenment”. Huh? Wow! Will it help me travel there? My note merely says: fresh, earthy, dried fruit aromas, sun-warmed dry grass; vibrant but quite richly textured. Good, honest warm-country wine. Forceful but integrated and balanced acid. Deliciously dry, with a youthful, fresh bite.” 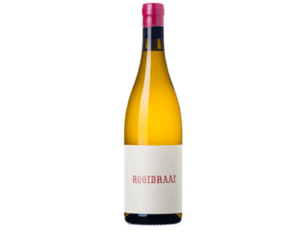 As for the pricier Rooidraai (R270), a single vineyard selection, it has a rather similar character but is more intense, fresh and youthful (more spicy and herbal, perhaps), but also more unharmonious in its youth. Days after opening, it remained taut, but it’s relaxing now and really rather thrilling. Be sensible if you’re in the market: buy the basic wine for drinking now and forget the Rooidraai for  five years at least.

Back to the bigger issue. Danie tells me of some more things that he’s been inspired to do on the family farm in Stellenbosch. Partly in reaction to what the current drought is doing, “I’m planting some Assyrtiko and Piquepoul de Pinet in 2019”, he says. “Got to try and live with the drier conditions and plant accordingly. Also, this year I’m planting Grenache Noir bush vines for the folks at Raats. We fix a price per hectare so I don’t carry all the risk and know what I can spend per hectare. I really believe that this should be the way forward.”

Oh yes, Danie, I agree. Amongst the other things that you and an increasing number of hitherto rather undistinguished grapefarmers are doing. Don’t forget your own label, especially as you have a great winemaker already there. The future is another country – we’ll do things differently there.