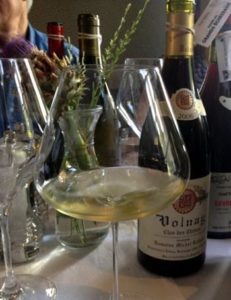 La Paulée de Meursault is a huge annual celebration of burgundy held each year. The more recently established New York equivalent has been described by Mike Steinberger “as the greatest Bacchanalia on the face of the earth”, and there’s also a recognised Paulée de San Francisco. Last year saw a Paulée in Johannesburg – less ambitious, but reportedly a fine event; and just last Saturday the first Paulée du Cap was held in Constantia.

The two local Paulées are organised by Great Domaines – not the largest importer of foreign wines into South Africa, but perhaps the grandest. And as far as its speciality goes – burgundy – no comparison is possible. In fact, I’d guess that not many importers anywhere have such a fine portfolio of, well, great domaines. Founder of the company Wayne Visser, a financial man in Johannesburg with a passion for the stuff, first brought in a little smart burgundy from its source at the turn of the century, and it became necessary, in order to get allocations, to build a solid list. Now, apart from forays into other areas in classic Europe, Great Domaines represents 26 of the finest houses in Burgundy – names that bring lustful and wistful gleams into initiated eyes around the world.

The trouble is that few of the great burgundies imported then become available to the casual, or even the avid, customer. The demands of the wide world’s wine-drinkers means that the company is obliged to be grateful for its small allocation of wines, the most desirable of which are produced in small or tiny volumes (a shortage exacerbated by small vintages in recent years).

In turn, these are formally allocated to a restricted number of buyers who have been purchasing from Great Domaines for a good few years – some might get just a few bottles, perhaps, of a rare wine on their allocations. The waiting list grows longer. Money itself won’t get you onto any of the allocations, though having a great deal of it will certainly help to pay for your bottles once you get on….

The most recent portfolio (of 2012 imports) shows, for example, Méo-Camuzet Richebourg Grand Crus at R6600 – a third, incidentally, of what it would cost you in London – and any number of premier crus for one or two or three thousand. (They don’t even bother to include the Domaine de la Romanée-Conti, so very few bottles bearing that most illustrious name do they receive.) Down to the village wines at something less than R1000, and a few mere Bourgognes for perhaps R250. Burgundy is very expensive and is not going to get less – for South Africans with a depressed rand it is going to get even more.

Perhaps a few people will be obliged to renounce or reduce their allocations next year, when Great Domaines managing supremo Derek Kilpin sends out his personalised, beautifully presented “Burgundy Allocations: Vintage 2013”. I must say that I am waiting with something like a feeling of doom to see what my own very small allocation (perhaps 18 bottles of village and premier cru wines from Dujac, Fourrier and Lafarge) will cost.

Along with around 40 other local Great Domaines customers, I attended La Paulée du Cap. Just a few local pinot producers were there, incidentally: a cluster of young Newton-Johnsons representing, as it were, the Hemel-en-Aarde, Chris Williams from Stellenbosch, Paul Cluver and Andries Burger from Elgin.

The idea – based on the Meursault original – was to bring along to the lunch (given by Great Domaines at Open Door) a bottle or two of burgundy to share. (I took two Volnay reds: Lafarge 1e Cru Clos des Chênes 2006 and De Montille 1e Cru Taillepieds 2007 – both showed very nicely, thanks.) That’s the basics. What happened then was, of course, a great deal of sipping and sharing and drinking (no spittoon in sight!) as the shadows lengthened towards evening. Not the greatest Bachanalia, perhaps, but a pretty fine small one to honour the wines of Burgundy, here at the foot of Africa.