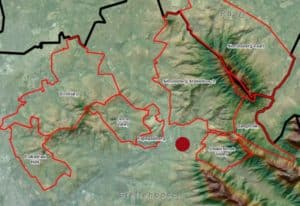 The wards of Stellenbosch.

A matter of wider interest emerged from my piece about the worrying state of the Stellenbosch Wine of Origin structure, prompted by a Dutch sommelier’s excellent dissertation on the subject. I mentioned that the discussion about wards had not been derailed by questions about whether estates and their marketers want the damn things anyway. Not put off, a professional brandsman (?), Jeremy Sampson, asked in a comment: “So what?” Rather, he said provocatively, “put time and energy into reducing, not adding to, the fragmentation and building up the reputation of South African wine as a whole”.

Another comment, from eminent winegrower Chris Alheit was pretty adamant from the opposite position: “We need way better regional identity.”

This is not a new debate, but I thought I’d make a few further observations. Firstly, two related to terroir (the physical givens of any vineyard or group of vineyards or larger area). One is that the effects of terroir differences demonstrably exist. Most famously in Burgundy, I suppose, where one winemaker will achieve very different results from different vineyards – but you can see it happening locally if you get to taste, for a related example, Hannes Storm’s three pinots from different wards in the Hemel-en-Aarde.

Secondly, terroir is only a part of the truth about fine wine. As I wrote about some time ago, you can taste the wines made from the five vignerons with virtually identical blocks of the Clos St-Jacques vineyard in Burgundy, and they are very different in character. In what way, the sceptic could (and should) ask, is the terroir of that fine vineyard expressed?

There are undoubtedly those who think that situations like that reveal the terroir obsession to be at least partly nonsense. Some seem to think this covertly, or even unconsciously: Just about all Burgundy lovers are believers in terroir, but they tend to be even more devotedly believers in the different skills of vignerons. The different wines off Clos St Jacques consistently achieve radically different prices. Wine lovers are actually paying, it would seem, not for the terroir but for the viticulture and winemaking.

That debate will continue to rage. However, here is a simple, pragmatic response to Jeremy’s “So what?” The majority of wine commentators are firm (theoretical) believers in terroir, as are many buyers of fine wine. If you want to attract the attention of the former and the dollars, pounds and euros of the latter, then greater attention to regional identity is the way to their hearts and wallets. And Jeremy’s contrast between fragmentation and building the reputation of the whole is, surely, a false opposition. There is no doubt that the recent rise in the general standing of South African wine among important commentators has happened on the basis of the top wines and their improvement. And the majority of those wines are terroir wines, wines of origin, of “fragmentation” (many of them referencing the smallest allowed fragment, the vineyard). And whatever is done to improve the reputation of, and interest in, those top wines will be good for the South African brand as a whole.

But there is another answer to Jeremy, and a more important one, as it is not about image but about the fundamentals on which (I hope) image can be firmly built. Whatever the “truth” about terroir may be, I am convinced that believers in terroir make the finest wines. Just as believers in terroir get a deeper satisfaction from drinking the stuff. Having the structures in place to encourage both winemakers and winedrinkers is important.

Take the Hemel-en-Aarde. I believe that the local producers originally wanted just one ward for the whole area, but the Demarcation Committee, investigating the terroir, thought that three wards would be justified and meaningful, and that’s what was legislated. Many people – winemakers and commentators – were doubtful, and worried about fragmentation at the expense of the area’s reputation as a whole. But even in the short time that the wards have been in existence, fascinating differences are starting to emerge in the wines they produce. Nothing definitive yet, of course, that will take generations, but this “fragmentation” has surely contributed to quality and reputation, as well as a determination to express the truth of the landscape.

As for Stellenbosch, so much larger and more complex, the same thing could happen, building the interest of both wine lovers and the best producers. Incidentally, it should be noted that it’s not an either/or matter on the label: “Stellenbosch” or some scarcely known ward name. Since 2013, a label may include both – and that is an important concession, and one that really should be taken up by more producers than it is now.

Last year saw the Stellenbosch Cabernet Collective founded. Whatever doubts one might have about the wisdom of focusing on varietal cabernet, one must hope that the Collective’s work will see an enhanced perception of Stellenbosch’s wines generally. If a meaningful understanding could be built, through the Collective’s efforts, of the terroir-based differences in Stellenbosch cab, and the winemakers could be motivated to better learn how to express those differences – wow, what a great advance that would be. And a revised, terroir-based system of wards would be the most useful tool that wine lovers (makers and drinkers) could have.