I’ve written elsewhere comparing the dining styles of two great Cape Town eating establishments (perhaps the two best, in fact, in my amateur opinion): Test Kitchen and Chef’s Warehouse; but here’s a note on the wines drunk at my one recent experience of lunch at the former, and my happily frequent and regular lunches at the latter.

The Test Kitchen being the grander and substantially pricier of the two, its winelist is correspondingly grander, pricier and longer. It’s an impressively well-chosen list, with the names of many of the Cape’s finest estates included (local winelists are too often ridden with misspellings and mistakes, but only one error here jumped out: Radford Dale Nudity is not a Swartland syrah, but a Voor-Paardeberg one), plus a small sprinkling of foreigners. Unfortunately for a restaurant of this class, vintages are generally merely current releases, though there are some older “icons” listed separately, with the oldest – by far – being Thelema Cab Sauvignon 1998.

We (four friends) started with a riesling, wanting something lunch-friendly, light and flavoursome. Unusually and admirably, there are four rieslings on the list (and three semillons, another often under-represented category). Van Volxem Schiefer 2012 is a modest example from one of the Mosel’s fine producers – actually from various Saar vineyards, but the Saar is now included in the Mosel appellation (it used to be Mosel-Saar-Ruwer). Elegant, lightish, steely enough and with just a hint of sweetness, it served us very well, but we decided to then move to the other German riesling on the list: Von Winning Deidesheim Trocken 2010, from another fine producer but in the rather warmer Pfalz. This was a touch cheaper (both were quite reasonably priced compared to some on the list; under R300 – I fear I can’t remember the exact figures), but we enjoyed it perhaps even more: the two extra years in bottle added to the interest of flavour, and it was beautifully dry. Both were fresh and lovely, in fact, with modest alcohol levels and a purity of flavour that consorted well with the exquisite complexities coming from Luke Dale-Roberts’s kitchen. 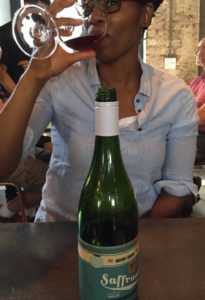 What to do for a lunchtime red? Keeping to the principle of purity, restraint, freshness, and respectable alcohols, we happily noticed Mount Abora Saffraan Cinsaut 2014. It did its job as well as we knew it would, both with and between courses. Then, with the cheese, we flung aside alcohol restraint, and had glasses of gently fiery and flavoursome old calvados….

Incidentally, the two other well-chosen Rieslings on the Test Kitchen list are Paul Cluver Dry Encounter 2014 and Jordan The Real McCoy 2012.

The latter also features now on the short winelist at Chefs Warehouse, as I and John Smelcer found with relief last Friday. (He’s my regular lunch-partner there, and had also been my generous host at Test Kitchen – where he took the photo of his wife Mpho enjoying the Saffraan.) The previous visit we’d had to shift from riesling, as the Lothian version had disappeared from the menu – we’d turned to Keermont’s chenin-based Terasse, which was very good, but a touch too rich and full when we’d been hoping for the tight, mineral Lothian.

On a beautiful autumn afternoon, sitting in shirtsleeves on the patio, while Bree Street went about its noisy business below (and the Cape’s vineyards desperately longed for an end to the fine weather), we contentedly enjoyed the Real McCoy living up to its name and accompanying our superb food with charming aplomb.