When golfer Ernie Els teamed up with Jean Engelbrecht of Rust en Vrede for the first wine to be produced under his eponymous label, what emerged was the most expensive modern South African wine yet. Engelbrecht ominously warned in advance that the price would be “commensurate with Ernie’s international standing”. The fact that it was to be directed heavily at the American market (presumably its legions of rich golf-fans in particular) played a part in this. The Ernie Els cab-based blend sold for $60 there, and R450 here. The current release, 2013, sells for R780 from the farm – still very expensive, but not at the local peak, nor anywhere near as lonely as it once was at that rarefied level.

If the price was guided by the American market, so was Louis Strydom’s styling: this was the time when Robert Parker’s aesthetic dominated the world of red wine, especially in America, so the wine had to be ripe, fruit-driven and richly textured, with smooth tannins and notes of expensive new oak. Wine Spectator responded gratifyingly,rewarding it with  93/100 points (as it did in the same report for De Trafford Shiraz 2000, at a mere $40) – the highest score it had ever given South African wine. 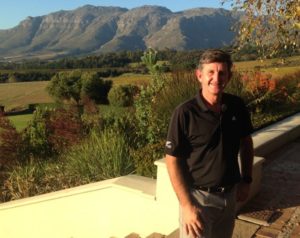 This was to remain the style of Ernie Els Signature, and of the other wines that gradually emerged from the cellar – after 2004 in its own quarters, with its own vineyards on the Helderberg, and Louis Strydom the brand’s dedicated winemaker. He’s now MD too; for something about recent developments, including the near-complete bowing out of Ernie Els, and the new German proprietor’s more recent acquisition of Stellenzicht, see here.

At a recent vertical tasting of the wine, held at the cellar – which is now closing for a year to allow substantial renovations and developments – that maiden 2000 performed very creditably. On its way down, no doubt, but still with an obvious fruitiness. We’d already tasted two vintages of the Proprietor’s Blend, 2006 and 2009, which included 20% shiraz as well as the Bordeaux varieties, and the Signature was immediately obvious as being not quite as massively, sweetly opulent, frankly alcoholic, as those wines (though no shrinking violet, indeed). But one of those wines that has aged rather than developed interesting savoury qualities over time – here the primary fruitiness remained dominant, monolithic even.

The 2001 was a better wine of a similar type, showing some complexity. My own tastes meant that I rather preferred the 2002 – perhaps because, from that poor vintage, it simply wasn’t as ripe, seemed a bit tighter and fresher, with a herbal touch. The ageability of all the older wines was not unimpressive – the 2004, big, bold and powerful, still has plenty of room for development, I would say.

Unfortunately the cellar has no remaining stocks of 2005–2007, so the vertical tasting was interrupted. It resumed with 2008, a brilliant balancing act whereby, somehow, the 15.3% alcohol allowed a touch of something like smoky elegance to come through, and a characteristic tealeaf note, and inevitably, a finishing touch of sweetness of effect (all these not bone-dry, well over 2 grams per litre of residual sugar and occasionally over 3; with the high alcohol level, generally something over 14.5% playing its part).

I’m reminded with these, in fact, of another big, bold and notably well-made Cape wine – Saronsberg Shiraz. That wine, too, in its best years also achieves an element of gracefulness that one wouldn’t normally associate with this style. All these Ernie Els Signatures were consistent in basic character and flavour profile, leaving room for some vintage differences – though these have not been strongly marked (the 2009 especially good, perhaps, and the 2012, which concluded the lineup, also impressive). Noteworthy and admirable, I think, is the quality of tannic presence that Louis has conjured, particularly after about 2008. The goal of a firm, structuring presence but also a soft, velvety approachability has been well met.

Whether or not one particularly enjoys this style, then, it would be hard to deny the achievement of Louis Strydom in his way of expressing Helderberg grapes in the Ernie Els wines. It will be interesting to see if more recent vintages, and those to come, will show any meaningful response to the comparative decline in the fashionability of big, ultra-ripe, voluptuous wines, even to a small extent in the USA.