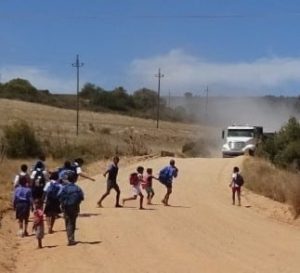 Sandmining truck on the Paardeberg.

To many winelovers abroad and at home, the Paardeberg is the most famous Cape winelands mountain – even more so, perhaps, than Stellenbosch’s Helderberg or Simonsberg. It’s where the Swartland revolution really took off, crucial to the development of South Africa’s current reputation as one of the most exciting wine countries. It’s home to the wineries of some of Cape wine’s most illustrious names, including Badenhorst, David and Nadia, Lammershoek, Sadie …, while many others draw fruit from the sprawling granitic mountain’s vineyards.

The Paardeberg’s agricultural, rural integrity, with rutted gravel roads and long, empty vistas, is being threatened by sandmining.  Some farmers, feeling no duty as custodians of “their” land, are going for the short-term, quick-cash option of ripping up vines and fynbos, with huge excavators pulling out sand to be carted away by thundering trucks that scatter children dawdling on their way home from school, filling the air with dust.

Shockingly, despite preservationists fighting to have the sandmining stopped and the Paardeberg protected from this destructive and ugly activity, Swartland Municipality still supports the sandminers in defacing one of its best-known areas.

This is not new; many readers will know that the fight has been going on for some three years now. But a new stage has been reached. The Protect the Paardeberg Coalition has had no positive answer from its demand to the Swartland Municipality to reverse the grant of consent authorising Paardeberg sandmining. It is being forced to take the matter to the High Court. The hope is to persuade the court of the illogicality and unreasonableness of the municipality’s support for the sandminers and that the court should direct it to review that decision.

Law is an expensive business, unfortunately. Local farmers and wineries and their supporters have already spent huge amounts in their fight. The Protect the Paardeberg Coalition is now looking to raise R500 000 for the next stage and is looking for wider support. Their words:

“Please join us in this plight to see the case through in the highest court of the country, in order to hopefully stop this travesty from becoming an ongoing reality. The Paardeberg and the Swartland need the hands of those whom it has blessed in so many ways in the past.

“We demand that the Swartland Municipal Tribunal reverse its grant of consent use to authorise sand mining activities on the Paardeberg. Like Gandhi, we believe that ‘The earth has enough resources for our need, but not for our greed’.”

There’s more information on the Protect the Paardeberg Coalition website. It also tells you how to help by making a donation. They seem to record the count of donors and I’ve just become the third – I hope that by the time you get there the number will be much greater!

By the way, if you want to read a fascinating article about the huge international business that is sandmining, and the damage done by uncontrolled and rampant sandmining in a world that seems to be, bizarrely, running out of (suitable) sand, try this one published in the New Yorker last year.