Tim James: Highs and lows of the CWG Auction wines 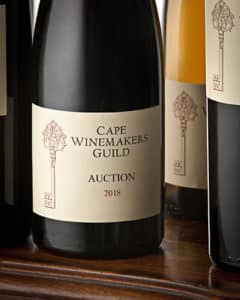 No Badenhorst wine on the Cape Winemakers Guild Auction this year, more’s the pity: a light, fresh cinsaut would have gone some way to redeem the excesses horribly lurking in the line-up. But for reasons I don’t know Adi has resigned (as has Bruce Jack), which leaves Andrea Mullineux as the sole representative of the Swartland revolution in the Guild – though we should perhaps include Marc Kent, as he frequently offers a fine example of Swartland syrah (this year it was blended with Stellenbosch), and even Duncan Savage in a spiritual sense (sadly no redeeming wine from him this year).

Clearly the worldwide movement towards restraint and freshness in red wines has been happening without disturbing the sleep of many CWG members. Excessive oak and ripeness are, thankfully, less the rule than they were, but are still very present. Yesterday, when I came away from blind-tasting the 47 wines on the 2018 auction, I remarked to someone that the last wine, a splendid 2015 port from Boplaas, seemed almost dry compared with some of the red table wines.

So common was the word “sweet” in some of my notes that I checked the technical details given in the Auction Guide, and even then was surprised. I usually admire the big wines of Dewaldt Heyns, even if I don’t much enjoy them, but his Saronsberg Shiraz Reserve 2015 shared my lowest marks with Cederberg Teen die Hoog Shiraz 2015, for similar reasons: the Saronsberg has 4.3 g/l residual sugar and 15.4% alcohol, the Cederberg 3.5 g/l and 14.8% – and the latter was also horribly oaky. I’d unquestionably rather drink water with a meal than either of these two. Bringing honour to syrah, however, are the truly excellent Boschkloof Epilogue and the very good Boekenhoutskloof.

Numbers don’t tell the whole story, and a few winemakers produced wines in this style, and with similar analyses, that I thought worked better. All these were from Bordeaux varieties. Spier Frans K Smit 20 Year Celebration I noted as “Ripe, rich, fruity, good supple tannins, big, bold but some finesse. Very good of its type.” And David Finlayson’s Edgebaston Cabernet Sauvignon Reserve (at 4.6 g/l RS almost off-dry by South Africa’s over-generous rules, and 15.3% alcohol) was even more successful. Nearly the opposite of elegant, but very well calculated and made, and valid – given that there still are many winelovers who admire and enjoy this sort of stuff. Johan Joubert’s Cab 2015 had numbers a bit lower, but seemed squishily overripe and sweet, though well structured. The Ernie Els 2015 blend is also sweet, at 3.6 g/l RS.

Even Kanonkop CWG Paul Sauer (I was scoring out of 100, and gave it a rare 95) has 3.3 g/l RS and 14.5% alcohol, though it seemed almost classic in this context. Etienne le Riche Cab Auction Reserve 2015 was ripe but blissfully dry-finishing (1.2 g/l RS – that’s the way to go!), with 14.2% alcohol, and also very good – or it will be when the oak integrates, as it should. Jordan Sophia also had respectable numbers and its ripeness was charming, partly thanks to the balance, the dryness and the excellence of the tannic structure.

Despite there being some successes, I think it’s rather shocking that a supposedly elite event like this should still be producing these overripe, sweet and alcoholic wines.

The pinots were better from this point of view, though there were still some real ups (the Newton Johnsons and, especially, Gottfried Mocke’s 2017) and downs (De Grendel Op die Berg, which shared my lowest score with the two aforementioned shirazes).

A special mention must be made of Bartho Eksteen’s Professore 2017, a tribute to Abraham Perold and Chris Orffer – “fathers”, as Bartho says, “of our very own Pinotage, Roobernet and Nouvelle”, the grapes from which his wine is made. It’s not very good, but is undoubtedly innovative (a sadly rare quality at the CWG Auction), and even quite interesting, if you can tolerate the herbaceousness from nouvelle.

A full third of this year’s auction wines are whites – I suspect that’s a higher proportion than usual. Their general standard was, as always, higher than that of the reds, though the prices reached will be generally lower. At that high level, my favourites were (all 2017): Bartho Eksteen’s wooded  Vloekskoot Sauvignon Blanc, Mullineux “The Gris” Semillon, DeMorgenzon Grenache Blanc, the chardonnays from Waterford and Paul Cluver, and the chenins from Rijk’s and Raats. The Raats Family Wines The Fountain Terroir Specific Chenin Blanc is one of the longest names on auction, and for me the finest wine of the whole lot, though still very young and a touch raw.

Overall the number of wines on offer this year is down, as are volumes. So I think we needn’t expect any new records. I wish, though, there’d be some record low prices for reds and some record highs for whites. But I suspect there’ll be a lot of rich punters who’ll prefer to overpay for sweet, fruity, oaky red wines than for a superbly elegant, deep-flavoured and fresh white.

We’ll see. The auction is at Spier in Stellenbosch as usual, on 29 September. Go to the CWG website for more details, including of various tasting opportunities.