Tim James: Kloovenburg on the up

Larger wineries are important to the stability and continuity of a region. Much of the excitement of Swartland wine this century has been generated by young winemakers buying in grapes – but mostly without owning their own land, and often enough without their own cellars. This is changing to an extent, as the revolution matures, and more new producers are buying land and building their own cellars – even if the practice of leasing vineyards is an inevitable (and not at all undesirable) part of the future.

Unfortunately, the producer cellars in the Swartland – the overwhelming weight – have not embraced change as fully, but one of the largest landowners is providing real excitement, with Willie Dreyer establishing Leeuwenskuil, and another great Swartland landowner, the Carinus family based in Stellenbosch, are nibbling – witness the fine debut wines made for Carinus Family Vineyards by Lukas van Loggerenberg (see here). Importantly, the large Lammershoek estate, after some hesitation and then a precipitous plunge, seems to have now attained stability and will be playing an important role in the new Swartland.

And now another well-established and very large property, Kloovenburg, has definitely joined the party. Owner Pieter du Toit took the crucial first step in the late 1990s when he started holding back some of his grapes from the co-op and vinifying them himself in a new cellar. But until fairly recently, although the wines were mostly decent enough, they were in a very different mould from that of the modern Swartland, as the dominant varieties made clear: chardonnay, sauvignon blanc, cabernet, merlot…. But Pieter was keenly aware of what was going on around him (he was, after all, selling shiraz to the Mullineux, for example), and growing more convinced. In 2011 he planted grenache, mourvèdre and carignan.

More recently, other new plantings have signalled a change in direction: more recently a magnificent vineyard site had the merlot ripped out, to be replaced by such varieties as grenache blanc, rousanne and verdelho. How symbolic is that?! Almost needless to say, the ubiquitous Rosa Kruger was involved…. 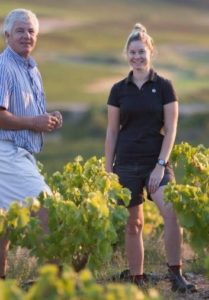 As well as making use of Rosa’s viticultural insights, another crucial moment happened when Pieter appointed young Jolandie Fouché as winemaker in time for the 2015 harvest. I’ve been meaning to make a visit to Kloovenburg for a year now, but it hasn’t worked out. Recently, however, Jolandie and I were both dinner guests of Rosa Kruger’s in Riebeek Kasteel, and Jolandie kindly brought some of her new-wave wines to taste (some of the older range is not so radically transformed – dare I say “yet”?).

There’s a new white version of the established Eight Feet label (the name celebrating the grape-stomping efforts of the du Toit children): a 2016 blend of chenin, grenache blanc, roussanne and verdelho – many of the grapes having to be brought in (from the Paardeberg) until the home vines mature. It’s a splendid maiden effort, with gorgeous texture, full ripe flavours, intensity and length, all in a youthfully lovely and harmonious unity. It’s a very good buy at about R160.

The three reds I tasted were also appealing, including the 2015 vintage of the original shiraz-based Eight Feet, with grenache, carignan and mourvdre. Plenty of flavour, depth and vinous weight without losing freshness; spicy and lightly perfumed. The Grenache 2016 is full but subtly flavoured, as modestly confident as Jolandie herself – though the vintage speaks through in a certain lack of oomph.

Any lack is, however, emphatically not noticeable in another new label, the not quite yet released Riebeekberg Syrah 2016 – yet another fine Swartland example (on the other side of the Riebeekberg from the slopes which produce fine syrah for Mullineux, Boekenhoutskloof and Leeuwenkuil, incidentally). Lovely, elegant, delicate, with ripe flavours and understated but informing tannic structure.

I’ve used the word “rlpe” a few times. These are certainly not “me too” avant-garde wines desperate for light, low-alcohol freshness at all costs. Jolandi had her definitive winemaking experience under the masterly Dewaldt Heyns at Saronsberg, and while these are certainly not made in the Saronsberg mould, she agrees that she’s a little nervous of under-ripeness. Not that I would dream of calling any of these over-ripe, but they have a richness of vinosity that not all of the Cape avant-garde aims at.

It’s going to be fascinating and, I have no doubt, rewarding to watch Kloovenburg over the next decade as Pieter and Jolandie develop their range. Unfortunately the wines are not yet easily available retail (it’s much easier to find Kloovenburg’s olive products!). I expected them to be available at Wine Cellar in Cape Town, but this up-to-date retailer seems to be rather behind in this case. Some are exported, including to the UK. But do keep a look out for (and even go to a bit of trouble to find) the 2015 and 2016 vintages – especially that white blend and the Syrah. As Rosa Kruger says, it’s fantastic to have this substantial family farm firmly engaged in the Swartland revolution.