You’d surely have thought this good enough business, even for the most sharkishly-minded: a bistro owner buys a modest, but well reputed wine from the producer; that evening it’s on his wine-list at a mark-up of well over 200%. It’s available by the glass too – a glassful costs 20% more than was paid for the whole bottle. If you were a customer and you realised, you might start wondering if you weren’t being ripped off (just a bit). 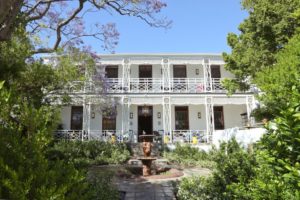 But that sort of egregious profit is apparently not enough for Cape Town club The Stack (with bistro, bar, function rooms, etc). A slightly disguised listing fee is now being demanded (the nasty practice was highlighted last year on this website, here). Wine producers have been told by Stack owner Nigel Pace that “we are requesting that wine farms sign up for membership at The Stack at the very favourable rate of R12,000 for the year (normal rate is R15,500)”.

But, no, that’s not a listing fee, it’s “a reciprocal gesture”. Yet the reciprocal gesture that’s required gets bigger the more wines the producer has listed. Mr Pace blandly reveals the true nature of the deal by adding that “Should we end up listing more than one of your wines then we will add R1,500 per additional wine onto your membership fees.”

When I approached Mr Pace for comment he sent me a document which calls this demand for R12 000 a “promotion” and says “We do NOT view this as in any way similar to a listing fee”. In his email, he refers to the increased “membership” fees for additional wines, the crudely obvious implications of which have clearly come to embarrass him:

That is, our flimsy disguise slipped a little, so we’ve had to adjust it. Actually, the sleight of hand is even more devious, as is revealed by probing the Stack website. The R15 500 annual membership fee on which Nigel Pace is offering his “favourable” discount (and which he intimates is tax-deductable “as a marketing cost”) is the fee for what are called “City members”. Country members (living more than 65 kilometres distant from the club) are charged R11 500. Now, almost by definition, most wine producers would fall into that “country” category in the unlikely event they wanted to become members. So in fact the “favourable” rate starts looking to be quite the reverse – even before the fee increases consequent on having more wines listed (additions that have apparently now been dropped).

But that’s beside the point. There are “perks” involved in being a member of this club (if you want such perks), but being forced to expensively become a member if you want your wine to be listed is essentially a wordy version of being simply being told to pay the money or lose the listing. And it’s not only the producer losing out, of course (and the taxman) – it’s the customer who gets a wine list that’s based on producers’ willingness to acquiesce in a practice which most of them would probably acknowledge as sordidly unacceptable if they knew about it (especially if they also knew they were also paying more for a glass of wine than the restaurateur/club owner paid for the bottle).

Incidentally, the producer who (shocked, amused and incredulous) forwarded me the Stack email-of-demand and gave me the example in paragraph one has politely declined to pay up. It is to be hoped that more will do so.

When Christian Eedes last May wrote about the issue of wine listing fees listing fees charged by restaurants he suggested the practice was “at least distasteful if not outright illegal” and that it “continues unabated”. To repeat what he said then:

winemag.co.za condemns the practice and urges all wine producers to resist paying them while we will also continue to expose restaurants who solicit such fees – the only way the situation is going to be addressed is to continue to bring it to the public’s attention.