A vineyard is not a natural thing: generally planted on prepared soils, often with artificial drainage, planted in rows with non-indigenous vines – themselves grafted onto rootstocks from a different species of vine – carefully tended, pruned and trained, sprayed at the very least with copper sulphate. There can be no such thing as a completely “natural” wine, something which would imply no significant human involment.  The closest would be, I suppose, picking some grapes from a wild vine growing up a tree, tossing the bunches into a pot and some time later drinking the fermented juice before it turns to vinegar. (Not for me, thanks.) From there, via organic viticulture and minimal-intervention winemaking, all the way to highly “industrialised” production in vineyard and cellar, it’s a continuum of human intervention.

Saying which is not to trivialise the efforts of those who work hard and intelligently and carefully to stay as close as they can to the natural end of the continuum. It’s just that we should be careful with words – slippery creatures – and not be like Lewis Carroll’s  Humpty Dumpty (“’When I use a word,’ Humpty Dumpty said, in rather a scornful tone, ‘it means just what I choose it to mean – neither more nor less.’”

I strayed into this train of thought after writing last week about Avondale Anima Chenin Blanc, which is an increasingly complex and sophisticated blend of different components – all of which are produced as naturally as possible, in different ways, off one organically farmed vineyard. (By the way, if you want to read an excellent attack on the pretensions of organic viticulture, “The Great Organic Grape Scam” by Miles Edlmann, is available online from World of Fine Wine.) Only recently I’d written, also enthusiastically, about another complicatedly assembled chenin, Donkiesbaai Steen – which has no claims to be “natural”, though one of its many components is spontaneously fermented.

Any blending of a wine must shift it a little further along the continuum away from “naturalness” (again, let me make it clear that this is not be any means a criticism, just an analytical point). This would be true if the wine is a blend of varieties, of vineyard sources, of cellar techniques …. whatever. I presume this is why Craig Hawkins for his Testalonga wines has a policy of “one grape, one vineyard” – and one cellar practice for each wine. 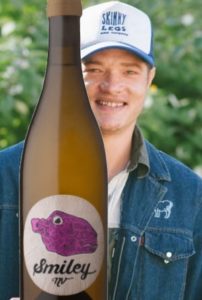 On the other hand, Ryan Mostert of Terracura and Silvervis, another of the Cape’s leaders in making “natural” wine, is not at all averse to blending. The thoroughly drinkable, thoroughly interesting Silvervis Smiley Red blends origins, varieties and (most unusually) three vintages.  Smiley White goes even further, with 14 different components, I believe, and must surely be the most complexly-built serious wine in South Africa. Four vintages go into the latest release (2015-2018). Only one variety, however, chenin blanc, coming from grapes off a number of different parcels on the Paardeberg. Naturally fermented, of course, in oak and stainless steel, some with skin contact. Then, they say, “The wine is matured in a combination of seasoned oak, stainless steel and glass demijohn. Post fermentation the wines are tasted and selected for ageing in a wide variety of different styles inspired by the white wines of the Jura and Jerez. Small batches are selected for under flor yeast ageing and others for Madeira style ageing….”

The result is a truly fascinating and gratifying wine, for which we must be grateful. But how close to “natural” is such a quintessentially cellar-made wine?

Interestingly, Ryan has recently introduced a Smiley Spesiale label, to highlight individual components of the blend, or perhaps be “even more experimental with small batch releases”. It will inevitably be hard to find – the maiden bottles, just 650 of them, mostly went to established Smiley fans, I believe.

That first Speciale was of a 2017 Paardeberg chenin, 20 days skin contact, 15 months in barrel. “Pretty straightforward stuff to be honest!” says Ryan. Undoubtedly so, compared with the Smiley White. Impeccably natural, of course – not even any sulphur added. And quite remarkable, characterful stuff it proved to be when I tasted it amongst the line-up of skin-contact wines assembled by Angela Lloyd earlier this year (reported on here). My note on the aromas simply says “extraordinary!”. A very forceful wine, with little fruitiness, and nothing like mere charm; clean, bone dry, with a firm grip from tannin and acidity; the nuttiness and austerity reminded me of an amontillado sherry (thought the structure is inevitably very different, with a modest alcohol). Fascinating and unique – but not really a load of fun. I must say I’m rather pleased that the Smiley blend is more easily, deliciously downable.

There’s much for a winery to consider when it comes to deciding on the right moment to release its wines – too soon and the danger is that they will...