Spending three months or so tasting wines and brandies for Platter is always interesting and a privilege, and frequently a pleasure. But it does mean that for those months the majority of what I drink is infant wines, many of them much rawer than I would otherwise choose. Though, of course, even many reds these days are so much lighter and fresher and less oaky than used to be the norm, which makes then a great deal more gluggable.

Nonetheless, it’s good to get back to choosing what to open, and it’s usually rather more mature wines. I mentioned last week how well the Sadie ‘T Voetpad 2009 is tasting, which elicited a comment asking if I had any experience with older vintages of Pofadder – the Swartland cinsaut in the Ou Wingerdreeks. (The comment came from Ashley who earlier this year confirmed that I’d been wrong about not believing in the early vintages of Treinspoor; he told me that the 2012 was really coming into its own now, with “wild, gamey fruit … now much more overt although the tannin structure is still very firmly in place”.) My apologies for not getting around to responding earlier, but here goes, along with some observations on a few other wines of similar age that I’ve had recently.

Incidentally, there are going to be some interesting tastings of older wines to come this year that I’ll be able to give some report-back on to what I hope is a largeish group of people interested in maturing their local wines and wonder anxiously (as I do) how they are getting on. It’s not as though many of us can afford to buy a dozen of each and open a bottle every year or two to monitor the progress…. Anyway, there are quite a number of “New Wave” Cape labels that are starting to become positively grown-up, and deserving of special tastings, even vertical ones. The first OuWingerdreeks wines are now that magical 10 years of age, and Angela Lloyd is opening her set of them very soon and is generously going to share them at a tasting. The maiden Mullineux Syrah was 2008 and Andrea and Chris are putting on a vertical tasting of the first ten vintages. Sadie Palladius is that bit older and Eben Sadie is holding tastings in both Johannesburg and the Paardeberg of “15 vintages” of the wine – whether or not that’ll include the first one, that refermented in the bottle, we’ll have to wait and find out!

Back to Pofadder. I hadn’t had it recently, but it seemed like a good idea, so I opened a bottle of 2010 (the second vintage). Certainly in good shape, with some rich power, and the bouquet and flavour tertiary and savoury, and complex and deep; but on the first night I found the firm dry tannin just a little too exposed for excellence, given that my guess was that there are not many more years for this wine. But maybe that’s wrong, as it improved impressively over a day, and was more open and generous the next evening. 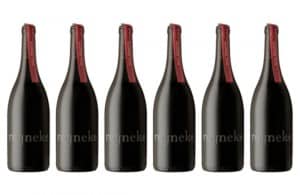 Interestingly, something similar had also been my experience with a few other bottles recently. The Reyneke Reserve Red 2010 I’ve always thought a magnificent wine, and bought 12 bottles on the recent Strauss auction; the first broaching was an initial slight disappointment, but the wine gave greater pleasure on the second night – it didn’t really last well till a third, however. And Alheit Cartology 2012, which I’ve had up and down experiences with, as there seems to be significant bottle variation. This bottle was initially only quite impressive, then opened up beautifully into something rich and fascinating and delicious. But I wouldn’t suggest holding on to that wine for much longer. Another wine of the same age was the Newton Johnson Block 6 Pinot Noir from 2012, the first year they made “component” pinots (this one now renamed Seadragon). It didn’t get a chance to improve over a day as it was so damned delicious from the start. Time to go on that one.

It then seemed a good idea, on the second day of Pofadder 2010, to open a slightly younger vintage, and I found a 2013. It was immediately brighter and prettier, more perfumed and primary, the tannins more harmonious. And, as always, vastly superior in its weight and seriousness to 90% of the delightful, light and rather trivial cinsauts that are the norm – with most of them, there’s little point in keeping them in the hope of a gain in complexity and interest. Both the 2010 and 2013 Pofadders gave great satisfaction and I had fun going from one to the other changing my mind about which I enjoyed more. I eventually but definitively came down on the side of the older wine. I’d keep the 2013 a few years more. But do remember that these bottles have been properly stored, which can make all the difference – take off a few years for poorly stored bottles. And I am much looking forward to tasting the 2009 Pofadder et al soon.