Tim James: On land and our relationship to it

This past week’s flurry of concern about the threat of sandmining despoiling the viticultural Paardeberg (I trust you noticed – if not, see here) got me thinking a little about love of the land. It’s not an insignificant concept in this country. Certainly I’ve often hear it touted in wine-growing, and I’ve seen many rather moving cases. Some farmers clearly do love their land. Just like some teachers love kids. (Some don’t.) 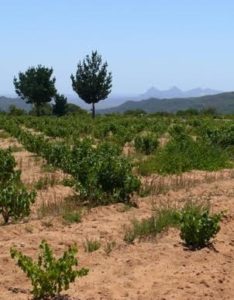 For example: it’s no coincidence that winemakers like Ginny Poval (Botanica), Chris Alheit and Eben Sadie were able so quickly to produce superb wines from the mountainous area near Clanwilliam that we now call “Skurfberg”, from dryland, sometimes elderly, vineyards that for long had been feeding huge co-op tanks, at the same rather miserable rate per ton as irrigated, high-cropping vineyards on the valley floor. Those vineyards were being farmed excellently, by hard-working farmers (and let’s not forget their labourers) living in very modest circumstances. (I know that one of the wives would work for months each year in the UK as a nurse to supplement the meagre income produced by the farm.) Their commitment to what they conceived of as their heritage, and I suppose a sense of security, or of establishment,  in owning this property – what we might as well call love of the land, their land – kept them labouring hard and effectively.

It’s hard to imagine them turning to sandmining – though it might have been sensible to switch to other crops, if possible, or pull out the old vines, as many elsewhere have done. Perhaps I’m too sentimental; I’ve certainly observed one or two people who get about in the industry sadly lose their innocent conviction that most farmers are more-or-less wedded to the soil. “Most” has changed in their minds, through experience, to “a few”. The few who recognise that inheriting land is not a right for the present, but a responsibility for the future.

Sandmining is not something you do on your land if land’s what you love. Let me not be too moralistic. Sandmining might well be something you do if you love your family and want to provide for them better than you can by farming grapes – because, perhaps, you’re not farming grapes very well. And grape prices are too low generally, as we know (but perhaps we still have too many vineyards – that’s another story).

So – the farm’s too bumpy and rocky for wheat; it’s not suitable for rooibos; cattle and sheep farming is also hard work; and, frankly, you’re pretty lazy (in the best tradition, I’d say, of South African farming, which like all enterprises in the beloved country has depended on the cheap labour of others – others, incidentally, whose claim to the land might be older). You feel entitled to your threatened lifestyle and want to make an easy buck, and the sandmining company will help – and who cares if the land is ripped open by huge yellow machines and the life of the farm is carried away in trucks to play a minor role in building yet another shopping mall (or even, occasionally, some tiny houses for the poor).

Someone made an convincing suggestion to me recently: we’re generally observing in the winegrape-growing business some fallout of the demise of the old industry-ruling KWV. For much of the twentieth century, the co-ops, with the KWV the biggest of all, guaranteed a decent income (and usually that holiday house at Elandsbaai) to anyone with a wine-farm. No matter how poor the quality of the grapes, a minimum price guaranteed. Quantity trumped quality any day.

Now things are different, and not all farmers prosper. I myself am not an admirer of capitalist market workings, but there is something to be said for the effects of the collapse of the KWV’s mechanisms, and the conversion of the co-ops into companies that no longer guarantee to take all the dregs of poor farming, or lazy farming (with an ill-trained, sullen, impoverished workforce). But if the new system isn’t working for you, perhaps it’s time to sell up and stop claiming to love the land. There’s no reason why future generations and your neighbours must pay by suffering the effects of you destroying it for short-term gain.

And there are others, let’s remember, with claims on the land too. And perhaps a little love for it.