Tim James: On Ryan Mostert of Terracura and other labels 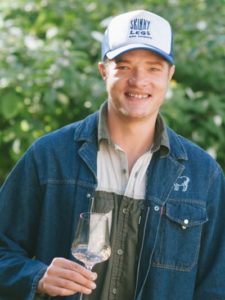 Last week, on the rainiest Cape Town day for a long time, Ryan Mostert was pouring his latest wines at a trade tasting in the Publik warehouse. @RyanTheWineGeek is his Twitter handle, and I don’t know anyone that the phrase suits better, so absolute is his wine devotion. To the point of fanaticism, even – but saying that merely reveals the difference between an ordinary wine-lover and old soak like me and a Great Wine-Lover like Ryan….

So, as always, a privilege to taste his wines and to hear him talk about them. Swartland wines all, but made in a fairly rudimentary rented winery on the Paarl side of the Paardeberg. Just about a year ago I’d visited him there, and he was a little despondent about some aspects of the difficult 2017 harvest, notably acids which he thought a bit low. He was considering blending some of the 2016 into the current vintage where he thought it necessary, which seemed a pity to me. Back-blending up to 15% of a different vintage from the one that’s named on the label is perfectly legal, and widely done around the world – probably mostly for “commercial” wines, to maintain an established character, but also by some very serious wines where the winemaker thinks it will improve quality, and making the “best wine possible” is the goal.

It seems to me, though, the wrong thing to do if you are genuinely serious about being a “hands-off” winemaker, intent on expressing origin. Because it is so impermanent, vintage (conditioned by weather) is not really part of terroir, certainly not in the way that prevailing climate is, along with soil, slope, etc. But it is a natural given, and should surely be respected as a variable part of origin. Unchanging character is important for big brands, but vintage difference is surely something that should be respected by the best winemakers of honest wines – in lesser years as well as more splendid ones.

Anyway, Ryan, I’m glad to say, decided against muddying the vintage character. It was inevitable he’d decide that, I believe. But it was partly his recent time in the great Côte-Rôtie cellar of classicist Jean-Paul Jamet that helped, Ryan says, and sharing his dilemma, and looking at the unsuitable “numbers” of some great Jamet wines.

The 2016 Terracura is due for release only around September (the other labels referred to below should be available now, I believe). It is still very tight, but is already drinking impressively in its modest, refined, classic way. I think Jamet would approve. From five Swartland syrah vineyards (70% Kasteelberg), unlike the six of the maiden 2015, and a touch rounder, more fully ripe and generous than that wine, with a little more alcohol; but bright and fresh, the all-whole-bunch character working very well, and the acidity in balance. It’s going to be joined by a Terracura White 2017, from Paardeberg chenin. Again whole-bunch and old-barrelled, as one would expect, but with nothing overtly oxidative (quite the reverse, really) except in the muting of primary fruitiness. Gentle and unassertive and quite broad as well as focused, it struck me; a good partner to the red, in that way.

The Silwervis Chenin Blanc, the real origin of the whole project, is still made in the single cement “egg” that Michael Roets bought at the 2010 Swartland Revolution. The 2016 is great after being on its lees for a year, wilder and more exuberant than the Terracura. But not more exciting than the latest Smiley White from chenin. The Smileys are fantastical, multi-vintage blends (nothing to do with achieving consistency, all to do with achieving fascination. Good value, too – less pricey than the Silwervis pair and arguably at least as winning. A multiplicity of winemaking techniques as well as vintage is involved, but the latest version strikes me as more harmonious than the previous, and less concerned to make one think of the components than of the present depth of satisfaction.

The Smiley Red blends various wines and varieties from 2015 to 2018, but is mostly from the middle two years. A touch of perfume, lovely dry tannins but a convincing smoothness together with a ready drinkability that is far from facile. On which note, I see I’ve not mentioned the Silwervis Cinsaut 2016. I’m increasingly bored with the deluge of wines from this variety, but this is one of those that reminds me it can deliver more than simple chic, fruity char. Ryan allows us to have intensity, density and tannic grip without relinquishing the straightforward delight.