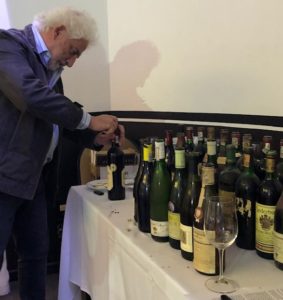 Michael Fridjhon made a rather poignant remark at the end of Sunday afternoon’s old wines tasting which, as usual, prefaced the start of his annual Trophy Wine Show competition. I can’t remember the exact words, but many of those who made the wines we’d been tasting are now dead, he pointed out; and they all did their best… And some of them did very well, I might add, and their efforts still strive successfully with and against the oxidation that eventually claims all wines – and all winemakers.

For around a decade now, Michael has been hosting this tasting of older South African wines, primarily for the judges of the TWS and especially the foreign ones, to give a context to the youthful brutes they’ll be looking at over the next few days. White wines must be 15 years to be eligible (and there are always fewer of them – partly because on the whole they haven’t aged as well as the reds, partly because no one expected them to do so, and therefore didn’t hang on to them); reds must be 25 years old at least. Here I’m only mentioning those of the 30-plus tasted that were particularly impressive or interesting.

The whites were all quite good, with the DeWetshof Rhine Riesling 2001 best of all: dry, mineral and fairly elegant, with a good acidity, not too much terpene development, and some fruit intensity still. The two 2003 chardonnays were very drinkable but, unsurprisingly for their time, marked by too much oak, especially the Warwick which still also showed ripe fruit, and retained length and volume. Quoin Rock (from Agulhas grapes) very attractively fragranced, with the high acidity leaving it now a trifle sour and lean. The oldest white we had was the Overgaauw Chardonnay CIWG 1988, a little oxidised but reasonably balanced and a surprisingly intense finish.

A mahogany-brown Swartland Cinsaut 1975 had its admirers but I thought it too old and acidic (undoubtedly added acid). Later in the tasting came a Stellenrood 1964, which must have also been from cinsaut (perhaps ex Stellenbosch?), and this was much better, with a very developed bouquet; lightly structured, pleasant, quite harmonious and nice (bizarrely, perhaps, it reminded me of the Tassenberg I reported on recently – 55 years more youthful).

The shirazes were led by the famous Stellenzicht Syrah 1994, made by André van Rensburg and the first local to be called syrah rather than Shiraz. The consensus was that this bottle at least had passed its best. My note: “Deep, opaque. Still fruit on nose, with some development. Spicy, rich. Powerful, vital, chewy, far from elegant. Full of flavour. Plenty of oak showing. Touch drying on finish.” The best of the older shirazes for me was Fleur du Cap 1973: attractive; the acid a bit apart, but the tannins nicely resolved, the fruit still quite nice and fresh. There was also an impressive blend with cab – Nederburg Private Bin R103 1982: “Rich, powerful, extracted. Forthright structure, still showing ripe fruit. But green notes too. That sweet finish.”

As usual, it was not only with the shirazes that the 1980s showed rather less well than the generally more graceful 1970s and 60s, often with oak standing out and the added acid making for hardness, generally more intrusive winemaking perhaps, together with whatever in the vineyards contributed to it (irrigation perhaps, bigger crops, more virus?). The youngest of the crop of cabs on offer, Stellenryck 1986 (an expensive and prestigious label at the time, made by the Bergkelder) was certainly more impressive than likeable: powerful, sturdy, sweet-finishing, oaky – its descendants are still being made today. Compare that to one of the oldest we tasted, Kanonkop Cabernet Sauvignon 1975, and it’s to enter a different vinous world: one of grace, elegance and charm; light-feeling wine, with good sweet fruit but a dry finish. (This was a particularly good bottle, it seems.) 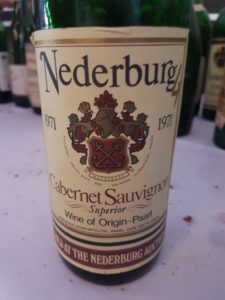 Batting for the same team were the two Nederburg cabs, with the 1971 fresher, with greater purity and also sense of youth than the 1972 – both with firm but resolved tannins and good acidities (no doubt adjusted, but probably at least responsible for keeping these wines alive). Two other 1972s were better than the Nederburg: Vergenoegd showing well, as old Vergenoegds almost invariably do, without being stunning; and Backsberg, a bottle of which would have been a delight with dinner.

There were two good blends: Kanonkop Paul Sauer 1993 was fairly elegant but full-flavoured (albeit a touch dilute); a touch too acidic, and the tannins starting to dry out (the editor liked it quite a bit more – see here). Nicer and more impressive than I’ve made it sound and very much in the noble Kanonkop tradition! And there had to be a Chateau Libertas: the 1979 it was, ex-magnum, made from cab, cinsaut and shiraz. My note: “Rather charming nose, balanced and fresh. Rustic, sweet-fruited and still drinking well. Moderate tannic structure, quite fresh.”

The tasting finished with a flight of pinotages, about which Michal Fridjhon pointed out that, as usual, they had lasted well and had softened satisfactorily, but hadn’t really evolved in terms of flavour development. But Swartland Co-op 1975, Neethlingshof 1973 and Lanzerac 1968 were all lively and pleasant, the tannins certainly there, but sufficiently integrated and unobtrusive.

One must hope that the Trophy Wine Show judges are this week finding a few happy echoes of the best of Cape’s past.