Tim James: Praise due to DeMorgenzon 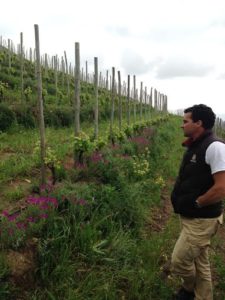 I’ve been dredging the internet to no avail, unable to check my wholly fallible memory that it was Sydney Smith, the nineteenth-century English clergyman, writer and wit, who suggested that one should “dine with the rich, but go to the play with the poor – for they are capable of joy”. Google doesn’t seem to think that anyone at all said it. But someone certainly did (before me, that is) and I remembered the line, precisely for its inappropriateness, at last week’s launch of Platter’s 2015.

One of the highlights for me at that interesting and pleasant event was seeing the hugely rich Wendy Appelbaums – with husband Hylton the owner of DeMorgenzon – reacting to the announcement that the estate’s Reserve Chardonnay 2013 had repeated the triumph of its Maestro White last year, in becoming Platter’s White Wine of the Year. No languid modesty here, from the owner no elegant restraint; just sheer, fierce joy. Hylton wasn’t far behind, either.

In fact, you only need to pay a visit to DeMorgenzon – just before Jordan at the end of the Stellenboschklof Road – to wander round the gardens and drive round the vineyards, to realise how much more than money has been invested here, and what the place means to the Appelbaums. There are other showplaces in the Cape winelands, but somehow there’s a personal quality, a difference, to the implacable devotion to beauty here.

It’s not just DeMorgenzon’s famous serenading of vines and wines with music (which has an ostensibly utilitarian purpose you can read about on the website Demorgenzon.co.za, and which doesn’t quite convince me – though I’m happy to benignly enjoy the music and realise that, like biodynamic nonsense, it does at least mean that great and harmless attention is being paid to the vines).

Every aspect, every prospect, it seems has been considered from the point of view of beauty to match the grandeur of Stellenbosch’s scenery. Flowers among the vines and edging the vineyards, with a broad border of shrubs and flowers and grasses along the narrow road running up the hill to the grand house that the Appelbaums share with the wind at the top. It’s not just the gardens – the whole place is like a garden.

Perhaps the motive for this could be seen as partly utilitarian too, for, as the website has it: “We have no doubt that a biodiverse and ecologically sensitive environment produces infinitely better grapes and the beauty of our gardens is captured in every bottle of our wine.”

And yes, well, the wines certainly have beauty too. Carl van der Merwe (previously at Quoin Rock) has vinified four harvests here, and each year seems to see developments. Going around the barrel cellar with him recently, listening to him and the music, and tasting from the barrels, I understood that just as much care and thoughtfulness goes into the vineyard – and cellar-work here as it does into the gardening.

If you haven’t visited DeMorgenzon, and can, you should – you won’t be disappointed. And if you haven’t drunk the wines, and can, then do, for there’s great pleasure and satisfaction to be had there too.

If I’ve been gushing, excuse me. I’ll retreat towards my more usual atrabilious mode by quoting Sydney Smith again – a sentence I found during my vain search for the other: “Among the smaller duties of life”, said he, “I hardly know any one more important than that of not praising where praise is not due.” Only too often it isn’t due; but it’s nice when it wholeheartedly is, as at DeMorgenzon.

The ups and downs of modern SA wine

“One winemaker, one winemaking philosophy,” said Alastair Rimmer when introducing the recent “A Decade of DeMorgenzon Chenin Blanc” – as the newly appointed CEO and winemaker at this Stellenbosch property,...