If one can have feelings for a grape variety, gamay noir is one of the more serious candidates for your sympathy. Burgundy snobs will know that it’s virtually disappeared from the grander vineyards of the Côte d’Or, where it once thrived – and that it was officially banned in 1395 by Duke Philip the Bold, who called it “a very bad and disloyal variety”. A variety, moreover, his edict declared, “very harmful to human beings”. Enough human beings survived it, however, and apparently even enjoyed it sufficiently to make it necessary for later dukes and the like to repeat the injunction. So the favoured pinot noir (one of the parents of gamay) didn’t have the field, or vineyard, clear for itself even in the Côte d’or – although the great home for gamay has been in the southernmost part of greater Burgundy, in Beaujolais.

The reputation of beaujolais has had its ups and downs – somewhat on the up at present, thanks both to a revival of interest in lighter reds and a greater concentration in the area on more serious styles than the frivolous, light and fruity beaujolais nouveau, with which the grape became dangerously associated. In the Cape, gamay has had a fitful presence over the years since, I think, it was brought in by Perold. I’ve no idea which was the first label – perhaps it was that of the Verdun estate (now Asara); certainly that was the best-known, and even the only varietally named version in much of the last decades of the 20th century. It’s there in the maiden Platter guide of 1980, while the 2000 edition also lists versions from Ashanti, Backsberg and Fairview. (As an aside, those producers who don’t offer their wines to Platter are doing a signal disservice to future winelovers and researchers trying to find out details about modern Cape wine history).

Currently, Platter lists only one producer of gamay: Stellenbosch-based and -centred Radford Dale. And it’s thanks to Radford Dale (and especially its presiding genius, Alex Dale, a great admirer of Beaujolais) that the Cape’s plantings of gamay have crept up again, following a major decline – to a magnificent total of 7.73 hectares at the end of 2018, all in Stellenbosch. That’s still over 10 hectares less than there was a decade back, and below the approximately 11 hectares reported by Orffer in his 1979 book. And no-one here even banned it or denounced it as a “disloyal grape”, as far as I know! It has just languished from lack of interest. 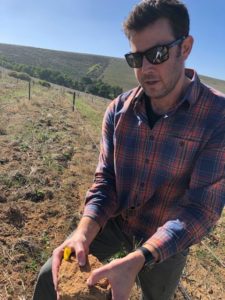 This week I visited, with winemaker Jacques de Klerk, the little gamay vineyard that’s made that latest upward difference. It’s on a splendid grape farm on the rolling Bottelary Hills, called Karibib, that provides grapes to some very classy names even apart from chenin to Redford Dale (Van Loggerenberg, Alheit, Craven, The Blacksmith, for instance). The new gamay planting (which should be completed this year, when material becomes available, and reach nearly a hectare in total), is a joint project between Radford Dale and the highly regarded farmer, Jozua Joubert – a former Warwick winemaker, who also now makes a few wines of his own off his Karibib, under the Solitary label, which unfortunately I don’t know (but intend to remedy that).

There are two Radford Dale gamays. The hipster, geeky winebar version is under the Thirst label (where, incidentally, the delightful skin-contact Clairette Blanche is well worth seeking out) and left me rather cold. Entirely wholebunch-fermented, made in traditional Beaujolais carbonic maceration style (reliant on an initial, intracellular fermentation that occurs within the berry itself); fresh, undoubtedly, and light at 10.5% alcohol, with a nice bit of fruity perfume – but I found the 2018 rather insipid and lacking vinosity and deliciousness. All this minimalism at over R150.

The more serious, generous version is called The Antidote, the current version being the maiden 2017, but I also sampled the 2018. It is also made by carbonic maceration, but with fewer stems included. Here, now, is something characterful, something a bit different in the spectrum of lighter Cape reds (12.5% alcohol). Its name offers it as a remedy to “high alcohols, big tannins, lots of oak, your car breaking down, a bad interview, a shit day at work, the dark powers against you… – everything we playfully call poison”. I can accept that. Winemaker Jacques suggested that it in some way “straddles pinot and syrah”, and that seemed to me, an acute characterisation, in terms of appearance, flavour and structure – the richer 2018 especially bringing out a spicy, peppery note, as well as an element of earthiness, both vintages having modest but informing tannins, a fresh acidity, and a rounded and textured whole. A rather elegant wine, and recommendable – even at around R400, if you can afford to splash out on something new and different. Gamay … why not? You needn’t even feel disloyal to pinot noir.