Tim James: Some thoughts on the Old SA Wine Tasting

At the “old SA wines” tasting that Michael Fridjhon conducts each year at the Grande Roche in Paarl, on the eve of his Trophy Wine Show and primarily for the benefit of the foreign judges, white wines must be at least 15 years old to qualify, reds 25 years. I’ve been privileged participate regularly participant over the years, and I’ve just realised a significant change in the past few: the white wines have become increasingly impressive.

White wine in the old South Africa was rather despised, certainly compared with red. This had two consequences: firstly, less ambitious white wine was made; secondly, less of it was left to mature. That pattern started changing after the post-1994 Cape wine revolution set in, and, with a growing recognition that the Cape could produce truly excellent white wines (on the whole better than the reds in many people’s opinion), white grapes were increasingly treated with respect. And white wines were, increasingly, left to mature.

So we’re now just starting to get the benefit of those developments at old wine tastings, where the whites are playing a larger role in all ways. This trend will grow in the years to come, as tastings of old wines start reflecting the proliferation of chenins and chenin-based blends, and the Bordeaux-style blends, and the fine chardonnays, plus the occasional sauvignon and whatever.

Enthusing about some of the whites at the 2016 Fridjhon tasting, I quoted Michel Bettane, the notable French wine critic and a judge that year, who remarked to me after the tasting that he thought the whites showed better than the reds (though obviously the range of reds was much larger); I noted that “it was a surprise to me to find myself agreeing with him”.
This year once more I was impressed – though, rather unsupportively of my argument, also with the few pre-1994 wines.

We started with Vergelegen Sauvignon Blanc 2002, which I admired very much. Still fairly pale; an elegant but quite rich nose and palate, with a serious acidity. Admittedly not very complex, but delicious to drink, with the merest hint of the green pungency which I dislike in cooler-climate old sauvignons. The bottle was screwcapped, and Michael Fridjhon said he detected a metallic note that he thought might be associated with the closure; he also thought the lack of overt tertiary characters might be ascribed to that – but I doubt this, given that in 2016 we had an even older Vergelegen Sauvignon Blanc (under cork), 1999, which was also excellent, perhaps even more so (it might have been the Schaapenberg version; the hand-written label didn’t make it clear).

There were two other, much older, sauvignons. First, the famous botrytised version from Klein Constantia, the Blanc de Blanc 1987. Some were disappointed with it, having had better bottles in the past, but I thought it quite fresh still, rather lovely and charming (and the international judges, for whom it was entirely new) agreed on its impressiveness. A 31-year-old Cape Sauvignon! And even the Lemberg Sauvignon Blanc 1986, made in Tulbagh by South Africa’s first professional woman winemaker, Janey Lemberg, was not quite negligible, nor dead – pleasant enough to sip briefly, but little in the way of character or interest.

If anyone had suggested to me that I’d prefer some old sauvignons to old chenins, I’d have laughed. But that’s what happened. There were two, both 2000s, early entrants in the serious chenin game. De Trafford was rather more oxidised on the nose than I like, with toffee notes, but much more appealing on the palate, fairly well balanced and with good texture, the oak harmoniously integrated. Ken Forrester Chenin Blanc 2000, off old vines, was also oaked, and a touch sweeter. I thought it showed a touch more vivacity, freshness and fruit than the De Trafford. Rather heavy perhaps (too ripe and sweet?), the acid seeming rather separate (presumably added).

One chardonnay there was – Talana Hill 1993. Toffee nose. Palate better and fresher. Preserving acid a bit bony. Oh, and a corked chard – Hamilton Russell 1989. And then Boschendal Grand Vin Blanc 1986. Another sauvignon! Mostly, that is. What to say? Some rather uninterested notes: “Good nose but, like palate, a bit funky. Alive but not special. Nicely vinous. Some nuance and detail.” I might not sound enthusiastic, but not too grudging a note for a 30+-year old sauvignon. I must re-examine some prejudices. Even postjudices. 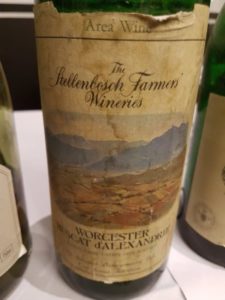 “More than a great survivor”.

And how about a 45-year-old hot-country hanepoot? SFW Worcester Muscat d’Alexandrie 1973. Proper grapey aromas, no denying the variety. Light, lively, pleasant drinking – I’d happily have a glass or two with my lunch and feel quite privileged, especially after a glance at the label. A bit more than a great survivor.