Where do people find their strange ideas and fragments of historical misinformation? I daresay I have one or two cranky and mistaken notions of my own, but those, of course, aren’t making me raise an eyebrow (not to mention simultaneously scratch my forehead, heave a deep sigh and shrug my shoulders – it’s a physical business, this, being a pedantic curmudgeon).

Take the story that wine was sent from Piekenierskloof (that lovely mountainous area between Citrusdal and the Atlantic, now famous for oranges and grenache) to Napoleon when he was imprisoned on St Helena from 1815 to his death in 1821. Certainly, quite a bit of Cape wine was sent to St Helena at the time, largely for the British garrison there, and, famously, Napoleon partook of sweet Constantia. But of a red wine from Citrusdal?

I first heard this tale a few years back, and recently I was sent (as proof?) a scan of an unattributed article in Die Burger from 1971 making the claim – but not offering a scrap of evidence to back it up. (It also speaks of the current production of “a red chianti”, which does perhaps indicate the unknown author’s level of wine knowledge. I suspiciously checked the article date, but it’s 20 October, not 1 April.)

Records available to me regarding the West Coast in the early 19th century are unfortunately scant. Somewhat later, however, in 1860, when Cape wine production had expanded hugely and communications had also improved considerably, there certainly was wine (and more brandy) recorded as being made in the more northerly reaches of the West Coast. I would guess that even then it was largely for local consumption, rather than making its way to the market in Cape Town – where there was a glut, anyway. But back in the second decade of that century, it’s scarcely imaginable that commercial quantities of wine would have travelled by ox-wagon all the way to Cape Town (or, even more expensively, to Lamberts Bay and then by ship). This at a time when travel between Cape Town and vastly more important Paarl and Stellenbosch was on mere sand tracks that took days for those lumbering vehicles to cover.

As always, I’m open to correction (and would be eager to be reliably refuted here – it’s a great story), but I just can’t believe that the exiled Napoleon was drowning his sorrows in red Piekenierskloof wine. 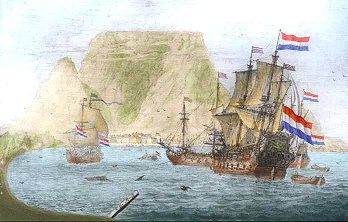 Another bit of thumbsuck stuff appeared in a recent press release from Rijk’s in Tulbagh, announcing their new MCC. It is, they burble, “made according to the traditional time-honoured method introduced to the Cape by the French Huguenots”.

Well, there are plenty of tales about the contribution of the Huguenots to Cape wine in the late 17th and early 18th centuries, and most of them are dubious in the extreme. I’m yet to see any contemporary evidence that these immigrants – poor agricultural labourers for the most part – contributed anything other than hard work to the early wine industry, while they strengthened the white, protestant settler presence and left behind some pretty farm names.

As to introducing a “traditional time-honoured method” of making bubbly wines… no. In fact, that “method” was really only codified a century later. At the time of the Huguenot immigration, sparkling champagne was only acquiring a tiny reputation in Europe, and it was widely regarded as an inferior by-product of the region’s still wines.

Why did the Rijk’s marketers get their idea from, I wonder?