Am I observing the start of a deeply disconcerting trend in the wine industry? Or is it just the problematical time of year when normally rational people resolve on doing or not doing all sorts of things and threatening their – or at least my – ability to cope with this cruel world? No word of a lie, on Saturday I chatted separately to two industry stalwarts, one a winemaker, the other a critic and a occasional blogger, who are both swearing to allow no drop of alcohol to sully their lips for all of January. A whole month! The winemaker was succeeding thus far (11.5 days), and had enviably been shedding kilos like people shed clothes at Sandy Bay. The critic admitted to succumbing to the comforts of a bottle of burgundy when the weather turned wet and chilly the previous day – but is resolutely determined that disciplined renunciation shall rule his life for the rest of the month. 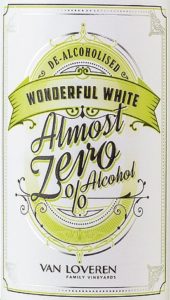 How low can you go?

This self-imposed prohibition also retrospectively cast a rather sinister light on the bottle of  I’d recently polished off. Almost Zero? Percentage of alcohol, that is. (To be precise, 0.33% alcohol by volume.) When a PR company had sent me this sample bottle, I rather snootily emailed them to say that I wouldn’t be reviewing it, as I only talked about wine – certainly not anything as debased as de-alcoholised ex-wine.

And yet here I am, and against all my expectations even proclaiming its almost-alcohol-free virtues.

Van Loveren is a machine, of course, an amazing, hugely successful wine machine – “South Africa’s leading family-owned wine farm” they proclaim, which is no doubt true if you agree with their definition of “leading”: big, making lots of money from expertly designed, made and marketed wines catering largely to the lower and middle bits of the market – especially but certainly not exclusively via the dreadful Four Cousins range. They already have some “lite” and “skinny” Four Cousins wines – but that just implies around 9% alcohol; and their alcohol-free sparklings are simply sweet grape juice. No doubt they were pushed into this latest venture by seeing the success of the first local dealcoholised wines, from Lautus, which I haven’t tried – but have read a few unenthusiastic reports on.

Dealcoholisation is a complex technological process – we’re not talking “natural” here even by the normal standards of industrial wine production. There are two main methods: the spinning cone column and reverse osmosis. Van Loveren uses the former. It seems that, by sophisticated magic, first the volatile flavour and aroma is captured, and then the alcohol is removed. Then, hopefully, you return the other stuff…. But it seems to be difficult to make dealcoholised wines that retain the aromas and flavours of wine.

So what of Almost Zero Wonderful White? There is, in fact, a good dose of somehow winey aroma and flavour, but it’s not really fruity or flowery and it would be hard to guess that sauvignon blanc was at its origin. In fact, dare I say that I prefer its character to that of many ordinary sauvignons. Because here’s the thing: a wine lover will miss the body and vinosity given by alcohol (I often significantly miss it even in some of the lightest products of natural winemaking), but Wonderful White evokes some of the feelings I have for wine, and I can speak of its balance of flavour and freshness when drunk as chilled as it’s meant to be. It’s more interesting, complex, substantial and lingering than the glass of Rose’s Lime Juice (a favourite drink of mine) that I consciously compared it to, for example. In short, it’s a pleasing, rather characterful beverage that’s much closer to wine than I’d expected. And the packaging is designed, of course, to look as wine-like as possible – it’s the glass that’s a limey-green, by the way, not the drink, which is standard pale straw.

Startlingly, Van Loveren claims a “maturation potential” of 18 months for Wonderful White. Strange concept under the circumstances, I think, but who knows. Of course, not being wine it’s not vintage-dated and there’s no bottling date given, so less easy to test. But I can certainly affirm that the flavours and aromas held up well when I kept the bottle and its diminishing contents in the fridge for over a week, and perhaps even developed interestingly.

It is, by the way, greatly more expensive than lime cordial, at around R65 per bottle. Is the technology all that expensive, I wonder? Or do Van Loveren simply know they’ve done something very clever which should sell by the tankerful, especially with their imprimatur? I confess that, in my weaker (or stronger?) moments when I think of imposing on myself a day each week without alcohol, I might be tempted by this substitute. Surely almost zero would be enough to placate my liver?