South Africa has been growing winegrapes for over 350 years without yet coming, as it were, to an firm conclusion, for there has been a continually shifting pattern of varietal plantings that I suspect is matched nowhere else. Much of the story of Cape wine can even be extrapolated from looking at the patterns of what was planted and when. This occurred to me while I was working on a lecture on the Cape’s wine history I’m giving today to the Wine management course at UCT’s Graduate School of Business. I broke down that history into four periods, and was tempted to give them all varietal subheadings.

Admittedly, the first 150-odd years was not easy to summarise in this way – partly because there was clearly such a huge amount of what might fondly be called experimentation, but was probably more a question of planting whatever became available. Also, we have little idea of what all the varieties were, given the sometimes bizarre names they were reported to have – or no names at all. For example, a traveller noted that Vergelegen at the end of the seventeenth century had “Russelaar, Pottebakker, and a Persian long white variety, as well as varieties from Avignon, Champagne and Burgundy.” Which doesn’t help us much.

There is, though, one thing to grasp at from Simon van der Stel’s famous announcement in his logbook of the first harvest at the Cape: “Today, God be praised, wine was pressed for the first time from Cape grapes . . . mostly Muscadel and other white, round grapes, very fragrant and tasty”. Other grapes grown in the early decades would have probably included Greengrape (Semillon), White French (Palomino), Steen (Chenin Blanc), Pontac, and other muscats. “The age of muscadel” would serve the purpose well, especially as it was to become one of the important grapes in the famous Constantia wines. 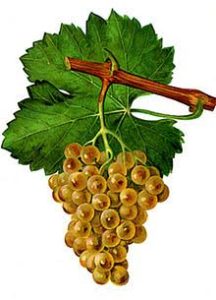 My second period is essentially the nineteenth century, from the time the British took over and established the Cape Colony, up to the devastation of the winelands by phylloxera. This one is easy to name varietally: “The age of semillon” (or greengrape, as it was then known). The industry expanded hugely in the early decades of British rule because of exports under preferential terms to the “mother country”. The number of vines planted trebled between 1795 and 1825. A contemporary commentator did some calculations (we haven’t much to go on, so we have to accept that they were more or less accurate and fair) and noted that, in 1822, more than 93% of the Cape’s vines were greengrape. It’s a staggering proportion, about which I feel some scepticism, but it could be explained by the extremely rapid growth of the vineyard in preceding decades: buyers had little choice, while farmers planted the most prolific and disease-resistant variety available. Even by the early 20th century greengrape still constituted about 40% of the plantings.

Cinsaut (hermitage it was called then, for some reason) by that time was creeping up, however – its rise at least partly thanks to high yields and its usefulness in providing sweet, fortified wine for black mineworkers in Johannesburg before racist prohibition was imposed. The bulk of the 20th century (if we don’t call it “The age of the KWV”) could be “The age of cinsaut and chenin blanc”, in honour of the two varieties that, in turn, served as the largely unrespected industry workhorses. Cinsaut declined in the years after World War 2, and chenin increased: a chart of their plantings makes a pleasing X shape, the crossing point occurring in 1968, when each had about 22% of the national vineyard.

And now, in the period of the great Cape wine revolution after 1994? Despite South Africa’s increasingly international pattern of vineyard plantings, I rather like the idea of calling this “The age of cinsaut and chenin blanc revisited”. That sums up for me one great strength of what has been happening at the most ambitious level of Cape winemaking: the taking up of tradition, and of varieties that have proved their suitability to local terroir, and making of them something new and marvelous.