Tim James: The launch of the Stellenbosch Cabernet Collective

Stellenbosch is unquestionably South Africa’s most important wine region: along (probably, these days) with the Swartland it’s the best known internationally, and it’s by far the largest in terms of quality wine production, with more than a third of the Cape’s wineries – some of them immensely prestigious. It also does most styles of wine and most varieties well: there are examples of almost all of them that are amongst the country’s best (pinot noir perhaps the most doubtful).

Trouble is, Stellenbosch has also been seeming just a bit conservative and dull in the last decade or two, as the quality and stylistic revolution in Cape wine rages around it. Its very size and fruitful multiplicity makes, firstly, for difficult politics: getting so many people to work together and agree on common goals is hard. Secondly, it makes for a lack of focus. With Elgin and the Hemel-en-Aarde you think of chardonnay and pinot – while knowing there’s much more too, of course; with Swartland it’s chenin and syrah and a fresh stylistic approach to cinsaut, grenache and the like; with Constantia, sauvignon blanc; with Franschhoek, semillon. Those regions have a useful hook.

Another trouble, Stellenbosch’s obvious hook is cabernet sauvignon – tied up with the other Bordeaux red varieties, especially cab franc and merlot. That’s a trouble because those are comparatively unfashionable varieties – associated with lots of power, alcohol and new oak; the image is old-fashioned stuff for rich older men. Lots of prestige, but not much youthful sexiness.

Now Stellenbosch is confronting the challenge, with last week’s launch of the Stellenbosch Cabernet Collective 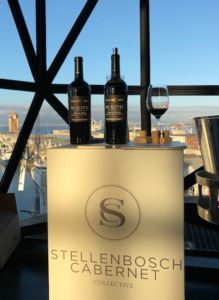 at a rather grand function, for mostly international guests, at the Seitz MOCAA museum in Cape Town the evening before Cape Wine 2018 opened. Working closely with the Stellenbosch Wine Route (but with its own membership, leadership and budget), the Collective is working to establish Stellenbosch’s claims as a significant producer of cabernet sauvignon. As the press release rather stolidly puts it: “The main objective of the Collective is to raise the perceived value of wine produced in Stellenbosch using Cabernet as a catalyst placing it on an international stage for the world to taste and appreciate.” Oh dear, they’re going to need to be a bit more lively than that! Christo le Riche, chairperson (chairman they call it) of the SCC is more direct and succinct. The main mandate is international, he told me, and the twin aims are “to up the price, and up the volume sold”.

There are at present 32 members – not including a few eminent producers of Stellenbosch cab like Reyneke and Boekenhoutskloof. They’re not members of the Wine Route, Christo explained, though in future all producers of wines with at least 85% cab will be eligible. Another absentee is Meerlust. I asked winemaker Chris Williams about that and he said they’d decided not to join as their main focus is the cab-based blend, Rubicon.

That raises an interesting question. Traditionally, blends modelled on Bordeaux have had a more prestigious place in Stellenbosch than have straight cabs, generally with non-varietal names (Kanonkop Paul Sauer, Delheim Grand Reserve, Meerlust Rubicon, Keets First Verse, Vilafonté, etc, etc). Many (including me) would claim these, on the whole, better represent red winemaking in Stellenbosch than the varietal cabs. There are obvious exceptions, including Le Riche. But it seems to have been Christo Le Riche and a few others that have driven this laudable development and they’ve decided to go with the cabs – but Christo is very clear that the SCC is “not fighting the blends”, though it would make things unfocused and difficult, he says, to include cab-based blends (the ones outside the 85% rule, that is).

So be it. It was perhaps significant though, that the formal tasting of eight wines at the launch (all the members’ wines were available in a walk-round tasting subsequently) included three foreign “benchmarks”, all of them blends, though cab-dominated: California’s Dominus, and two “super-second” Bordeaux wines – Léoville las Cases and Pinchon-Longueville. That’s a bit of an odd comparison to insist on, especially when the real competitors to Stellenbosch cab internationally would probably be varietal wines from Australia and Chile, as well as California.

Incidentally, I thought the two Bordeaux 2015 wines were easily the best wines of the line-up (despite the unwelcome continued and irritating hype of the presenter, Simon Tam of Christie’s of Hong Kong , who was something of a liability at the event). The Dominus 2011 was polished to near-death sophisticated smoothness, and did make the locals (from the same vintage or near ones) seem particularly characterful and gutsy: maturing example from Le Riche, Delaire Graff, Rustenberg, Rust en Vrede and Waterford (I think the only one with a vaguely significant contribution from other grapes). There was no question, however, about Stellenbosch offering the best quality:price ratio, despite the escalation in recent years.

The Collective is a fine and perhaps important initiative, especially if it prompts further energy in marketing Stellenbosch as a whole, locally as well as internationally. We must wish it well. There are great wines there.

Read more about the launch of the Stellenbosch Cabernet Collective here and here.