Tim James: The resurgence of Lammershoek

I was reminded yesterday that the price paid for seeming natural and casual is often a great deal of painstaking work, work done with total attention to detail. It’s true of wine, of course – the reason why many “natural” wines are poor is that you have to be so much more careful if you’re going to do without some of the technology: a sophisticated understanding of what nature wants to do must replace sophisticated tools.

This careful approach applies to the wines of Lammershoek – it is, I think, by far the largest estate committed to the approach of the Swartland Independent Producers. But what made me think of the concept was the small party Lammershoek had yesterday to launch the new wines in their Mysteries range of small-volume, mostly rather interesting wines. It was imaginatively held in a dry river-bed on the Paardeberg farm, and better organised, with only local resources, than many professional party-givers would manage, I think; any need or want of the guests was anticipated, from carving steps out of the bank and clearing away stones from the party area, to a small band of farmworkers providing happy background music, to excellent simple food (including vegan stuff).

Lammershoek has not had an altogether easy run in the few decades of its modern incarnation (it was first proclaimed in 1718, and the oldest parts of the cellar date back to the mid 1800s, when vines were planted). Paul and Anna Kretzel and a German partner bought the farm towards the end of the last century, and started holding back some grapes from Perdeberg Co-op for their own label with the 2000 vintage. If you want to consider the radical change since then, consider that the first releases included a cab-merlot blend and a sauvignon blanc. Oh – and a chardonnay, but I’ll come back to that.

I first became aware of Lammershoek as a source of good value, modest wines. Over the next ten years, mostly with Albert Ahrens as winemaker, the wines moved towards accordance with the new Swartland wave being defined by the Sadie-Badenhorst-Mullineux nexus. Then, not altogether attractively, Albert was shouldered aside and young Craig Hawkins arrived to infuse viticulture and winemaking with his radical ideas of “natural wine”. There was positive here, but negative too, with some frankly slightly dodgy winemaking, as well as some excellent innovations, including a real commitment to earlier-picked freshness, and new wines, amongst them the delightful entry-level Lam range. But customers were lost, and the most significant retailer of their wines stopped stocking them as too unreliable (though the really experimental stuff was happening with Craig’s own Testalonga range).

The ownership of Lammershoek had also changed significantly, the weight now being with a German consortium including the great German footballer Franz Beckenbauer. There was some disquiet in the radical Swartland when the plug was pulled on the Hawkins-Kretzel team, with rumours of a new full-on commercial approach – happily unfounded, though the expensive experiments with organic viticulture were to be cut back severely.

I’ve said before and it is even clearer to me now, that the best think that happened to both Lammershoek and Craig Hawkins (and the Kretzels into whose family Craig married) was this split. Craig and Carla’s subsequent success story is well known, that of Lammershoek now becoming much clearer. 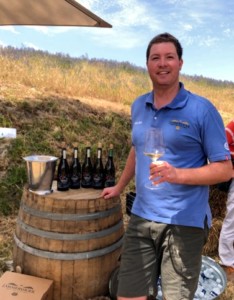 Witness, among other wines, the Mysteries. I confess that I was having such a pleasant time at the launch event, and there was no formal tasting involved, so I didn’t make any notes and am offering little more than a list here (ed: there are plans to review the wines more formally in the near future). There are eleven of them, if I count correctly, with two 2017 blends (made in slightly larger quantities than the others): a pleasant and mildly interesting fruity Mysteries Red, and a particularly good Mysteries White, perhaps the delicious pick of the whole bunch. Four other whites: Varkhok 2018 is a good single vineyard Chenin; Haarde Blaar 2017 is a Lammershoek speciality, a light, really interesting and characterful Hárslevelü, a little skin contact adding to the body;  Die Oranje 2017 is a skin contact Chenin which would be an excellent choice for those who like just a tinge of that character, notably the stony dryness it produces – it’s light and easy, still quite fruity; and that chardonnay, Die Ou Nooi 2018, off what appears to be the oldest chardonnay block in the Cape. Hardly a Swartland speciality, this is the only wine in the range not bearing the Swartland Independent Producers logo, as the organisation doesn’t have chard on its list of recommended varieties.

Of the single-variety reds, I particularly enjoyed the old-vine tinta barocca – Die Ou Man 2016; the grenache, Die Duiker 2017 is also charming, fresh and tasty with some depth, and I’d probably have to say something similar about Die Onderstok 2017, which is from an old vineyard of carignan planted experimentally on a variety of rootstocks, except that I’m not an admirer of carignan. There’s a red rarity too: Die Swart Strooi, a straw wine made from vine-dried syrah. I didn’t taste this, as I left early, before dessert.

These are all wines worth trying if you enjoy characterful, lightish and fresh Swartland-new-wave wines, made with minimal intervention. The blends are well priced, compared with many such wines (R170 from the farm), while the others are admittedly rather pricey, mostly R360-R400, but the Varkhok Chenin is R500 and the Ou Nooi chardonnay R700. I daresay the prices might be justified by the rarity and small volumes (and the fact that exports remain dominant in sales) – but perhaps they also constitute a statement that Lammershoek is a Swartland winery to be taken very seriously, which it undoubtedly is.