Tim James: The SA wine avant garde and the concept of camaraderie

The winemaking “avant garde” (for want of a better word) in South Africa is one of the strongest in the world, and there’s no doubt that one of the reasons for its continued joyful growth is the solidarity and mutual support of the many young winemakers involved. There’s no jealous guarding of grapes, of secrets, or marketing and winemaking tips. They help each other more than compete. It’s reminiscent, to an extent, of the origins of the Cape Independent Winemakers Guild, when a bunch of winemakers got together to pool their understanding and experience in order to compete with the richer, much better resourced big merchants (a rather different scenario from that of the current CWG).

As with the other aspects of Cape avant-gardism, the vital originating moves of winemaker mutual support began in the Swartland. From the start, once he’d set out on his own, Eben Sadie was welcoming and encouraging of others – in the early days, for example, of Tom Lubbe (now in France), of someone like Chris Mullineux inspired to make a Swartland wine at Tulbagh Mountain Vineyards, of Adi Badenhorst – like the Mullineux, soon to set up his own Swartland enterprise. The Swartland winemaking revolution was made into an exciting, thriving and vital thing through the working together of all those who chose to commit themselves to this thing that was both a home for themselves and also much larger than themselves. The winemakers there continue to give each other whatever support they can. From what I’ve seen, offers of help are easily made, requests for it never refused.

This attitude has spread widely through the winelands. I’ve written before about one example of it, the little “centre of excellence” at Gabrielskloof, where Peter-Allan Finlayson hosts a handful of young winemakers, taking further the experience of practical solidarity he’d had when working with Chris Alheit (and latterly John Seccombe) in shared space in the Hemel-en-Aarde. And Peter-Allan has told me something of the sharing attitude of those who established the best traditions of the modern Swartland. “Pretty much every young winemaker who has started their own brand in South Africa in the last 10 years has worked with Eben Sadie”, he says. A crucial reason for Sadie’s influence has been, in fact, his willingness to help where he can; and this generosity of spirit has been taken up and gone wide and deep. Don’t underestimate its influence on the wine in your glass. 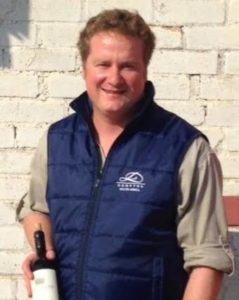 I realised again just the other day what a crucial element of the South African wine revolution is this working together, when I visited young Lukas van Loggerenberg and tasted from barrel the first (2016) wines for his own label. He spoke of making the desperately difficult decision to go solo, and the support he’d had from others – and then of all the assistance he’d had when he’d broken his knee just at the start of the harvest, and had to have two major bouts of surgery at the time when he had to be busiest in his cellar. Established good friends are, of course, supportive, but the sort of help given young winemakers like Lukas goes wider. He says, for example: “I constantly receive help from all over with contacts sharing some of their contacts in the industry and cellars helping out with some machinery which I don’t have and only need for a short period.”

Lukas is celebrating this spirit in the name of his (as yet unbottled) chenin blanc: Kamaraderie. And he goes further: “Camaraderie for me is also so much more than just between friends though, it is also the enthusiasm which emanates from farmers who used to sell their grapes at dismal prices to co-ops who share the journey of this venture with me in letting their vineyards come to their full potential.  It is the energy and camaraderie that is present during harvest time when farm-workers and cellar-hands work long hours to ensure grapes are picked at the optimal time and treated with respect in the cellar.”

The wine just has to be good. Fortunately it is.