Tim James: The tale of one of many dead and dying Cape vineyards

One consequence of the Western Cape drought is certain – the size of the Cape vineyard is going to continue shrinking, as it has been doing for over a decade now. Probably at an increasing pace. The latest available official figures show the decrease from 2006 to 2016 (which is when the drought was only starting to hurt) as 6 371 hectares. We can be pretty sure, however, that the decrease is more than the official figures have it. How many heartsick farmers who can no longer afford to maintain a marginal vineyard, or see it dying and grapeless in the waterless heat, how many of them will bother to tell SAWIS that, effectively, the hectarage of Cape winegrapes has shrunk that bit more?

This year, many vineyards have died, especially up the West Coast, and many more have been simply abandoned – some temporarily perhaps, some for good. Low prices for grapes just make things worse, when a vineyard is already more-or-less marginal in terms of profitability; a reduced crop (and next year’s is also going to be problematic after all this stress, even if the rains are back to normal) can push a vineyard into the no-go zone. It’s slaughter out there.

A poignant announcement in this regard arrived this week, in Chris Alheit’s otherwise surprisingly upbeat, hopeful newsletter talking of the 2018 harvest. I was taken back to a visit I made in October 2015 with Chris to the Bottelary Hills in Stellenbosch, to the original chenin vineyard, planted in 1971, that went into his sublime Radio Lazarus wine. The Alheits had started farming the resurrected block in 2010. I saw the “old, damaged and now-loved chenin bushvines struggling to welcome spring with fistfuls of bright green leaves to feed the meagre bunches of grapes that will sparsely appear in the months to come”.

But despite all the effort and passion that had gone into rehabilitating the vines (after many years of overwork and neglect) the vineyard was still in a poor way. I observed: “Many of the gnarled, heavy stems on the vines of the Radio Lazarus vineyard will never flourish with leaves and grapes again. Too many are dead, or implacably dying. Never, to me, have the leaves of spring seemed so precious or hard-won.” 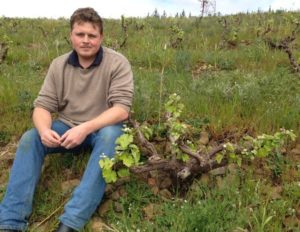 The photo alongside is of a pensive Chris Alheit among these vines that he loved; I think he was made more aware on that spring day that the vineyard was doomed. And that was before the drought.

His recent newsletter said that there has been no wine made from this vineyard this year – or, in viable quantities, from the other, nearby, hilltop vineyard which had also supplied Radio Lazarus since 2015. So, “2017 will be the last release of Radio Lazarus.  It’s taken me a while to come to terms with this reality.  We’ve poured so much into these vineyards over the last few years.  Seeing them in 2018 was very difficult.”

That older vineyard, it seems, is all but dead: “We didn’t even try to pick it this year.” It wasn’t just the cruel dryness and heat that finished it off; hungry buck, confronted by barren veld, had come like never before to eat what green shoots there were.

The other vineyard, planted in 1978, had fared a little better; Chris says they managed to pick just eight crates of grapes from its two hectares. “You get the picture”, he writes. “These hilltops are dry in wet years.  A hundred-year drought has pushed them over the edge.”

But he adds: “What does make me crack a smile, though, is the fact that both vineyards were on death row, due to be ripped up, and yet they lived on a few more years to make some of the loveliest wines we’ve ever had the chance to work with.”

The bottles I have of Radio Lazarus were precious, and are even more so now. The resurrected one has died anew and will not, this time, return. As Chris says simply: “Goodbye Radio Lazarus.”