Tim James: The tiny minority of wine drinkers that is us

That invaluable annual document from SAWIS called South African Wine Industry Statistics has had a practice of reporting on local retail wine sales according to the following price classifications: high priced: all wine selling for R35 or more per 750ml; medium priced: wines selling for R22–R35 per bottle and most of the boxes; standard priced: 5L boxes selling for less than R125.

I wonder how often any reader of this website buys a bottle for under R35, let alone five-litre boxes for R120. Despite its stated focus on “South African fine wine”, Winemag has recently decided (perhaps, I’d like to think, in response to the interest evidenced in my little series on finding good wine under R100) to look occasionally at wines a touch closer to that R35 boundary. Though not very close: the “Best value tastings” consider wines costing R60 to R120 a bottle – still astronomical prices in relation to what most South Africans pay.

The latest, recently released SAWIS booklet of stats (available here) uses more nuanced categories to report on 2018 retail sales of wine. Here they are, showing the volume in litres of wine sold in those categories (rounded out to the nearest million litres); you’ll note that the big volume drop comes pretty low down, from Basic to Premium:

That is, 318 million litres gets sold for under R48 per litre. Just 68 million litres, less than 20% of the total, goes for more than that. Not much more than 10% of wine sold in South Africa costs more than Winemag’s lower limit in its “Best value tastings”, which reward “great everyday drinking – wines which offer refreshment and flavour under ordinary circumstances, are widely available and don’t cost too much”. Depends what you mean by “ordinary” circumstances, in fact. Or “too much”.

We’re a very tiny drinking elite here, and if we are to talk grandly about “the wine industry” we need to remind ourselves of that. If, for example, we want to argue that having a market in which Vilafonté etc can sell for a few thousand rands a bottle is going to affect prices in general.

If you’re wondering what kinds of wine are sold in the rainbow nation, the Sawis booklet gives some interesting figures. Only seven varieties, sold as varietal wines, sell sufficiently well to be worth mentioning. By far the biggest is sauvignon blanc: nearly 14 million litres. Next is merlot, something more than half of that. Chenin blanc and Cabernet Sauvignon follow, Pinotage and Shiraz rather further behind. Blends are more significant for red (13 million litres) than white (4.4 million litres).

It’s all quite, er, sobering. 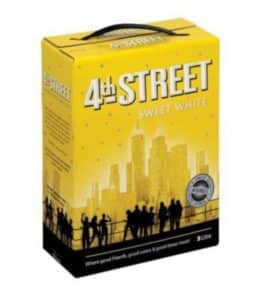 We’re a nation that’s pretty overwhelmingly drinking cheap, sweet wine. (The health warnings should be less about alcohol and sulphites and more about sugar: “This wine will rot your teeth and make you fat”.) So South Africa’s wine industry is, correspondingly, overwhelmingly producing cheap, sweet wine for it. The figures I’ve quoted above are for the local market, which consumes about half of production; a much larger proportion of exports would be dry. Nonetheless, those who spout forth about “South African wine” as a whole, or even the majority of it, being underpriced must take into account all those wines before I’ll easily accept their arguments. Forget about Vilafonté and Paul Sauer and Columella. When you say you want the top wines to “drag up” that vast bottom end, even forgetting how you think that’s going to happen, how much do you think a five-litre box of 4th Street Sweet White deserves to be selling for, guys? Because that and its like account for the majority of South African wine-drinking.