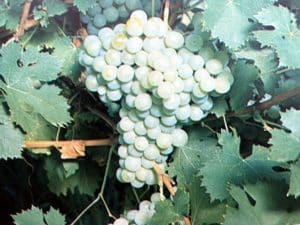 One could do worse than take the grape variety raisin blanc as a bellwether, a trend indicator, of what’s happened to South African wine over the past fifty years. It wouldn’t tell all, but its story could point in the right exploratory directions. The chances are, of course, that at least 90% percent of Winemag’s readership have never heard of raisin blanc (certainly not those under 60). And that is part of the point, I suppose.

I became somewhat intrigued by raisin blanc when I was doing some largely tedious primary research in the first edition of Platter, published in 1980, and called John Platter’s Book of South African Wines. That maiden publication – with no intimation that it was to soon become an annual event – referred to a mere 1065 wines. I know that because I counted them (and distinguished between varietally and generically named wines, a difference I was after for another story). But while counting, my eye would get snagged by significant words and names, such as the one in question.

There were, a recount revealed, eight wines called Raisin Blanc, as well as, for example, a whole lot called Stein (generally indicating off-dry whites), a bunch of Clairette Blanches, a few Sultanas and Ugni Blancs, a White French or two, and probably as many Steens as Chenin Blancs). No doubt some of the Dry Whites also featured raisin blanc, and I should think some of it also fed the brandy industry. Platter tended to characterise the Raisin Blanc wines as something like “light, dry white”. He calls it a “’vin ordinaire’ cultivar, low in sugar and acidity, good for rebate wine”.

The very fact of there being Raisin Blanc at all is testimony to what was still going on in Cape vineyards under the iron rule of a KWV implacably devoted to protecting all grapegrowers’ incomes through a strategy of encouraging quantity rather than quality. The name means, of course, simply “white grape”, but I wonder why French – perhaps because there already was a fransdruif (palomino). The variety had been identified by Professor Perold in 1912 as the grape known in southern France as Servant (its origin might be Eastern European). In the Languedoc where it lingers it is mostly used for table grapes, and it also served that purpose in South Africa – not very successfully, according to Professor Orffer in his Wine Grape Cultivars in South Africa of 1979. Orffer describes its wines as being “light and fresh with a delicate taste, though somewhat thin”; nonetheless it is one of the only 44 varieties he discusses in his little book. Further evidence of its significance.

And now? Now no-one has heard of raisin blanc, let alone cares (it doesn’t rate even the most cursory of Wikipedia mentions). There are still a few vines here, however: 13.17 hectares at the end of 2017, mainly in the Orange River and Breede River valleys, plus a few stragglers in the Klein Karoo and Robertson. The larger Worcester area was raisin blanc’s main hangout in its glory days. Actually I don’t know when plantings peaked, but Angela Lloyd kindly did a bit of research for me in her archives and found that in 1983 there were over 2000 hectares, half in Worcester. A decline was perhaps already underway, and by 2000 it was a precipitous one, with just 432 hectares grown.

Angela did point out too that raisin blanc was not alone in its decline: between 1983 and now, clairette blanche fall from 3 186 hectares to 197; even more spectacularly, palomino went from a pretty massive 11 665 hectares to 125, reflecting the collapse in the local “sherry” industry, for which palomino was primarily intended. Interestingly, though, clairette and especially palomino are now being valued by some enterprising, heritage-minded younger winemakers. Raisin blanc is not; a thoroughly nondescript and negligible variety it seems to be, whose disappearance from the Cape’s vineyard is surely not to be regretted.

On the other hand, we could compare the story of a few black grapes. In 1983 raisin blanc was only a few hundred hectares behind cabernet sauvignon. It was, 35 years back, three times as plentiful as shiraz!