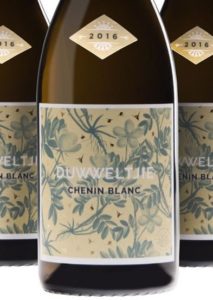 The first and undoubtedly most important thing to be said about the maiden release from Thistle & Weed, a wine called Duwweltjie and from the 2016 vintage, is that it’s very good. It’s yet another instance of the Cape’s great resources, both of chenin blanc and of ardent young winemaker-viticulturist teams ready to make a fresh, delightful wine from it. Here the chenin comes from an old Paarl vineyard, while winemaker Stephanie Wiid is moonlighting from Fairview and viticulturist Etienne Terblanche from Delheim. (The latter bits of information are, it must be said, my deductions – only their names and not their day-jobs are given on the press release, while the website www.co.za speaks namelessly of “a group of friends” and has a photo of four of them.)

Welcome, then, to another fine, eminently drinkable chenin, priced at R150 a bottle, which is around the range-middle, I suppose, for such wines. I noted a clean thatchy nose, a little dried apricot; sweet fruit well balanced by acid; concentrated, dry, nicely textured; touch of succulent greengage greenness on the finish; well-balanced lowish alcohol, with no lack of vinosity. Importantly, I finished the bottle, with great pleasure.

But I am irritated by the whole package, I must say, which doesn’t, I feel, do justice to the wine. The names, first of all. “Thistle & Weed” sounds like the name dreamt up by a brewery’s PR company for a pub in a Glasgow shopping mall – not convincingly authentic, not very South African. What the group of friends glibly say is that it’s “inspired by the tenacity and survival skills of thistles and weeds to which we can draw parallels to the grapevine as it is considered by many as the ultimate weed”. Oh. Yeah. Who, actually, thinks of Vitis vinifera as a weed?

Talking of actual weeds, the name of the wine, Duwweltjie, comes from “the Duwweltjies (Tribulus terrestris) in the vineyard that cling to the soles of your shoes—reminders of paths travelled and those yet to be explored”. Oh, again. Trouble here is that the name is in this case so authentically local that it’s virtually impossible to pronounce for anyone not brought up with Afrikaans as at least a second language. Nor will most people have any idea that a duwweltjie is that hateful little multi-pronged thorn that gets into my dogs’ paws and punctures my bicycle tires – forget unexplored paths. Devil’s thorn is one English name for the plant, and I presume that “duwweltjie” comes from “duiweltjie”, meaning “little devil”.

The back label only hints at the meaning, with the “paths travelled” stuff but not the “soles of your shoes” stuff, which would have helped a little. The charming, pretty front label shows lots of little gilt thorns scattered against a representation of the plant which makes it look as soft and attractive as, well, any little plant with leaves and flowers.  If you’re going to name your wine after a tough little brute of a thorn (the website says: “they’re spiny, prickly and a nuisance at the very least”), then such a pretty image is surely inappropriate design? And the white text is not really easy to read, either.

I take great pleasure in the rash of uncompromisingly and untranslated Afrikaans names appearing on wine-labels these days (and don’t ever like the idea of abandoning traditional names – even tough ones like Buitenverwachting). It’s a mostly Afrikaans industry, after all (workers, winemakers and owners), and it’s good that there’s now the self-confidence in the wine that requires the purchaser to make a little effort, to recognise “otherness”. Hermanuspietersfontein was, I’m pretty sure, the first modern winery to use only Afrikaans on its labels; Sadie Family’s Ou WIngerdreeks (Old Vine Series) is also doing so very successfully, and there are now too many individual wines with Afrikaans names to mention. (There’s even a newish negociant label called Sluk Jou Woorde, with a maiden Oorbly Shiraz!)

But look at most of those established names. None of the Hermanuspietersfontein or Ou Wingerdreeks names are complicated or polysyllabic or too difficult to get reasonably close to in terms of pronunciation – Swartskaap, Kleinboet, Treinspoor, Skerpioen, etc. But Duwweltjie? Angela  Lloyd, with whom I tasted the wine, has lived in South Africa for 30-plus years and had no idea how to say the word – nor did she recognise it, let alone know what it meant. That’s a double-whammy for other potential non-Afrikaans-speaking consumers, surely?

Not good thinking; not good packaging. But get past both, and you’ll really enjoy the wine.