Tim James: Update on the drought

In this drought year of 2018, with the wine-grape harvest now well under way in warmer regions and for earlier-ripening varieties, there are some happy stories, but the bad news – and there’s plenty of it – is very depressing.

Official mid-January crop estimates had been revised down from those made at the end of November 2017, when widespread cooler weather and some showers had given room for a little more hope. I remember Eben Sadie saying to me around then that his Swartland vineyards were looking fairly promising – if there would be just a little more rain. Instead, warmth and dryness characterised December and January. And since that mid-January estimate, there has been some great heat in many parts. Now, north of Malmesbury, says Sadie, there is devastation.

Last week I rustled up a few comments from areas that were already harvesting, for a piece on the drought for World of Fine Wine. A repeated observation was that things were looking worse than expected. The impact of the drought has been all the greater because it is in its third year. As Rosa Kruger told me, what reserves the vines had managed to keep and maintain are now exhausted.

Dryland areas like the Swartland (and dryland-farmed vineyards in other areas, like Paarl) have been hardest hit, given the low rainfall, as well as regions like Olifants River which depend almost totally on irrigation from the huge dams for its bulk-wine production. Nearly everywhere, water quotas have been cut, but nowhere more so than Olifants River, where farmers got no more than 17% of their usual quota. Cruel choices had to be made about which vineyards to keep alive, and which to abandon. I’ve heard reports of many, many vines up the West Coast, especially around Vredendal, just dying – not just with burnt leaves and withered crops not worth picking, but dead. 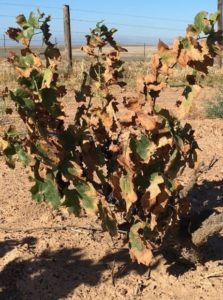 A drought-affected vine in the Swartland.

The Swartland looks likely to be down, in general, 30-40% at least. The photo alongside (by Jaco Engelbecht – visualviticulture.co.za) shows an extreme there. There are, of course, some site-specific differences  – and variety-specific differences too: chenin is faring a little better than semillon in the area often called Skurfberg, in the hills of the Olifants River region, for example: the yield of one semillon vineyard there was reduced by some 80% from normal. But at Lukas van Loggerenberg’s old chenin vineyard in Paarl, despite much expensive and loving tending, the already small yield was down by half (by weight), and then the berries were thick-skinned and dry.

Ripening is very uneven in many parts, so rigorous selection of the already small harvest will have to be made by those ambitious for high quality.

If Olifants River is suffering most, elsewhere too (apart from the Orange River, apparently) farmers are having to grapple with reduced water. Viticulturist Marko Roux tweeted a few days back: “No more water to be released into Berg River from today – farmers on their own now – >80% of crop still out hanging!”

The theme of “worse than expected” continued when I spoke to important Robertson farm Ernst Bruwer in Robertson (himself a supplier of grapes to some big names – and to his wife Nina-Mari Bruwer, whose maiden  release of Mont Blois chenin, chardonnay and muscadel was a fine success story last year). He reported sunburnt leaves and dry grapes and the likelihood of a crop reduction of around 20% – but then a day later, as he heard from more harvesting farmers, he said the figure was likely to be more likely 25-30%; acids are low and ripening uneven.

Stellenbosch is not yet harvesting much, and is hopeful that things will not be down much, as irrigation has continued to be possible, though often on a lesser scale. Chardonnay deliveries to DeMorgenzon have, though, been down 15-30%, says winemaker Carl van der Merwe. But generally, he says, Stellenbosch vines are mostly looking good, despite water reductions. (I must say that I had been suprised to realise this year just how many Stellenbosch dams were full of water pumped in from Theewaterskloof, and not from local catchments, as I’d naively thought.) Chris Williams of Meerlust confirms that all is looking good there – partly thanks to their large dam.

The harvest has a long time to go for cooler areas and later-ripening grapes. We must hope that the worst news is largely behind us.