Tim James: Viniculture and Literature on a Saturday Evening in Suburbia

I love it when different interests mine of come together in some way – collide, merge, glare at each other, or whatever. It happened again this evening [Saturday, that was], when I was at home by myself, eating and drinking and reading on my sofa, my feet up on whichever dog was choosing at the time to keep me company. The photo shows the essential elements apart from my photographing self: sofa, Jack, book (of which more anon), empty dessert plate, empty bottle of Wightman, Gouws and Clarke Pinotage 2016, pretty full but emptying bottle of KWV 10 Year Old brandy.

(Missing from the pic is my WhatsApp communications with the Clarke part of the aforementioned wine, in which we discussed not only the pleasant bitter tinge in his Pinotage, but also plans to buy some Italian wine from Great Domaines – including Felsina Berardenga Chianti Classico 2015. Despite my recently aired horror at the price of many foreign wines in South Africa, though not this one, I can think of only a handful of local reds – stress RED – that I would as admiringly and happily drink for R275.) 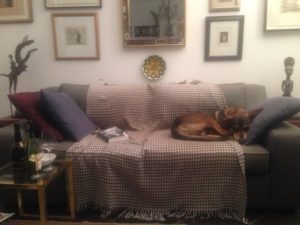 My pic shows quite enough interests coming together, but merely coinciding in time rather than conceptually. For the moment I’m being inebriatedly high-minded and referring to Literature and Viniculture. The book I was starting at this stage of the evening was a collection of essays by the Brit writer Martin Amis, The Rub of Time (itself not a bad title for an appreciation of age on wine). Amis begins his Author’s Note and Acknowledgements by saying that: “In the process of its composition, a lyric poem or a very short short story can reach the point where it ceases to be capable of improvement.” The authorial fear of tampering is “that this is going dead on you”.

One of the great joys in drinking much of the best modern wine is the recognition that the winemaker has done comparatively little; hard work, enormous intelligent effort is what should happen in the vineyard rather – which is why viticulture and viticulturists are so much more interesting, really, than winemaking and winemakers, and it’s also why more and more of the most creative winemakers want to spend more time in vineyard than cellar).

Amis goes on to refer to Northrop Frye, a great Canadian literary critic who said (in the words of Amis) that “the begetter of a poem or a novel is more like a midwife than a mother: the aim is to get the child into the world with as little damage as possible”. Similarly it has often been said, notably by the best winemakers, that what winemaking primarily demands is to not muck things up. That depends on getting good grapes into your cellar, of course. Sometimes (only too often, and not only in South Africa), good winemaking means making the best of a bad viticultural job. That is a function of great importance, one for which we must be grateful.

But there is also greatness. The experienced palate’s sense that what you’re getting is “merely” an expression of what the vineyard has delivered to the winemaker is a thrill of subtlety and force. You get it here in, for example, Sadie ‘T Voetpad, in Alheit Magnetic North, in the sauvignon blanc of Reyneke White Reserve, in Storm Vrede Pinot Noir  – and in many other wines (including some modest ones). These are wines that are like the live literary creatures that Norththrop Frye speaks of as liberated from “the navel strings and feeding tubes of the ego”.

This is a place where good art and good winemaking overlap – knowing when it’s time to stop working at it; when to stand back. I have a feeling that, at the more humble levels of reading and winedrinking the same thing happens.  Stop intervening too much. Appreciate consciously and intelligently and be grateful. And occasionally get drunk (but, if you’re writing, check the next day what you’ve written).