Tim James: Wine – the stuff of love and soil 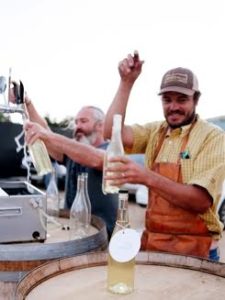 Adi Badenhorst and Callie Louw in action at the Swartland Revolution.

Two responses to my last week’s piece on the Swartland Revolution made particular sense to me. Though they were essentially antithetical, having to resolve the contradiction recalled to me an essential significance of wine in modern life.

The first response came in an email from someone fully involved in the wine industry who commented, having said how much the event had been enjoyed (again): “If I’m paying R3000 per person I want better wines than was offered this year”. And it’s true that the revolution is expensive (though is costly to put on, and seldom breaks even), and also true that, unlike the great show of international wines put on last year, this year’s wines were comparatively modest (and the Californian ones were donated, though freighting them in wasn’t). As my not-rich correspondent said, when you think of the food and wine the ticket price could have bought elsewhere, “R3K for young vine cinsault…”.

That young-vine cinsaut, with young-vine grenache and young-vine agiorgitiko came in the “Swartland Secrets” tasting of experimental or sideline wines made by the Revolutionaries. It was this tasting that was named as a highlight by a hugely enthusiastic first-time visitor to the Revolution, Ankia Pelser, in an online comment to my blog. Ankia didn’t go into much detail, but said: “I enjoyed the passion that was portrayed – from the winemakers and from the wine-drinkers alike.”

That’s it, I think, the basic reason for the success of the Swartland Revolution. It offers, and this also applies to events like the Young Guns tasting put on by Wine cellar each year, a chance for people to get further in touch with one of the real marvels of the life of wine: that it is one of the things most resistant (though far from immune) to the deadening estrangement from the sources of much of our sensual lives. It is the stuff of love and soil, not just of accountants and marketing strategies

As consumers, we seem to be surrounded by choice, within the limits of what we can afford, but are we really? Supermarkets, the most implacable face of consumerism, succeed in controlling our choices down to a few possibilities in most things: a few variants in yoghurt, tomato sauce and washing powder, etc. But move to the wine section, and the brand possibilities explode: even if a few big ones are comparatively dominant – there’s no comparison to the choice of cooldrinks or (dare I say?) whisky.

This genuine choice is a triumph that we must strive to hold on to, before wine goes the way of so much else agricultural. And the choice reflects the nature of production of wine: not, for the most part, huge, capital-intensive concerns, but small-scale activities, with real people – farmers and wine-makers – making choices, caring about what they do and why, and seeing the process through from beginning to end. I think all real wine-lovers experience wine in this larger way, as a link to something we have mostly lost, but retain a dim sense of, in our so-directed lives.

Those of us – like my email correspondent – who move amongst those who work in the vineyards and cellars can sometimes forget what a privilege it is, and take it for granted. For us, rare and costly wines to taste are more important at an event like the Swartland Revolution, and that is fine and correct. But I’m reminded what a real thrill it is to get involved in the whole story. And, incidentally, what a limited approach it is to regard wine as just that liquid in the bottle, to be rated in abstract.

We need more public wine festivals; it would be good for wine in every respect.