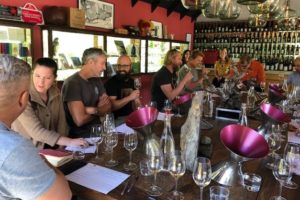 One of those wine days that come as a rare treat and privilege… Firstly a chance to learn something about the Portuguese coastal region of Bairrada, when Joaquim Sá, MD of Amorim Cork South Africa and unofficial local wine ambassador of Portugal, organised a fascinating tasting of Bairrada reds and whites going back to 1991. It was hosted by Boekenhoutskloof and presented by Emile Joubert to 18 or so people – mostly a wide assortment of winemakers whose common thread apart from eminence was presumably a degree of commitment to cork, plus a few viticulturists and, happily, me.

Although modern Bairrada allows for the standard international grapes, we focused on the two great traditional grapes of the area (and it’s hard to beat Portugal’s splendid range of indigenous winegrape varieties) – bical (white) and baga (red). Mostly from Luis Pato, the great traditional name in Barraida and a passionate exponent of baga, and a few each from his daughter Filipa Pato (these in perhaps a more modern, though resolutely hands-off style) and PáIacio do Bussaco (also grand and traditional).

I think most of the tasters agreed that the whites produced more stars on the day, including an impressive, still-fresh 1991 and two particularly fine 2003s. It was the brilliant acidity that counted, perhaps – as it did with the reds, which also packed a massive amount of tannin to help in their preservation. Baga is sometimes compared with nebbiolo on those grounds, but it seemed to me from the older reds here (1997 and 2001) that baga’s tannins are there for keeps, and won’t magnificently resolve in time as nebbiolo’s do. Incidentally, baga has a history of being the real workhorse variety of the region – Emile told us that it has historically been the grape in the famous (notorious) Mateus Rosé (at one time the biggest brand in the world, and certainly the first wine I ever bought at a restaurant – in London in the early 1970s – on the advice of my dining partner, I being totally ignorant). And like bical, baga finds its way into some traditionally made sparkling wines.

The baga wines were not disappointing, but less exciting than the white bicals and bical-based blends. Full of character, but the traditional ones rustic compared with good Italian nebbiolo. There was also a modern, youthful one made by the ubiquitous and invaluable Dirk Niepoort in typical fresh, whole bunch-ferment, less tannic style – it roused the great ire of one of the tasters who denounced it as a commercial traitor to the grape! Others saw this point but were more forgiving… A more successful modern style came from Filipa Pato, whose Baga Nossa Calcario managed to retain the character of the grape while making it more easily accessible to contemporary wine lovers. Marvellous wine.

So, an altogether interesting and delectable morning. Chat over lunch (such a good one – including pork, though not the suckling piglet traditional in Bairrada) was perhaps dominated equally by discussion of the wines tasted and, inevitably given the attendees, talk of the current vintage. Some of the winemakers present, like David Sadie, had long since taken in all their grapes; others, like Abri Beeslaar of Kanonkop only much more recently, and Craig Wessels of Restless River in the Hemel-en-Aarde still has cabernet ripening (hopefully) on the vine. And, as in all discussions I’ve heard about this harvest, a great deal of disparate experience and satisfaction – though most people seem to agree that there are plenty of weird aspects to vintage 2019.

One thing I’d heard quite a bit about is that chardonnay has been hit quite hard – though more in terms of yield than quality. I was sitting next to Andrea Mullineux and she invited me to call in, on my way home, to the Leeu Passant cellar on the edge of Franschhoek to taste especially her Stellenbosch Chardonnay – yields down perhaps 10%, but quality well up to scratch, she said.

So I had my first taste of the 2019 vintage – and Leeu Passant chardonnay was a good introduction (followed by samples of cab franc and Cinsault). From two barrels representing two pickings (close in time, but one with still a few grams of unfermented sugar). What to say? Lovely wines – in fact, I could have taken a bottle home and drunk it with great satisfaction as a young, unoaked chard; but no, it has a long way to go in the care of Andrea and her winemaker in Franschhoek, Wade Sander. I left clutching a bottle of Wade’s own Brunia Pinot Noir – and Andrea insisted I needed a 2016 Leeu Passant Chardonnay to accompany it; they are still firmly closed (no need to cram them also into such a day) so I shall report on them some other time.