As we experience in South African wine no less than elsewhere (and perhaps a bit more) there’s a “duopoly” in wine these days: two dominant styles – plus the middle ground. The rather grand word “duopoly” is Jancis Robinson’s in this context (she also speaks of a “dichotomy”), in a recent syndicated article on the subject, freely available here.

There’s nothing very original, but it’s a great catch-up piece, especially useful for those fairly new to the big wide world of wine and a bit puzzled by what Jancis claims as a “new phenomenon” – which it clearly is on this scale of split, though probably there have always been wines in both “full throttle” and lighter styles.

I was interested to see her remark that “there is one, very important, part of the wine world that has largely resisted the twenty-first century trend. Napa Valley, and some of its satellite regions in northern California, are still producing particularly concentrated, relatively late-picked wines … that are pretty similar to those that were made 20 years ago”.

Napa’s signature variety is, of course, cabernet sauvignon, as is partly the case in the area in South Africa that in some ways comes closest to Napa: Stellenbosch. I think it would be fair to say that the majority of Stellenbosch reds are made pretty much in the style they were made in the late 1990s, though now frequently expressing that style with a degree more polish and skill. Stellenbosch whites are less conservative – the chenin and chardonnay revolutions have registered; but cabernet sauvignon, pinotage, syrah, and their blends still tend to the big, ripe, concentrated, heavily oaked style that now seems somewhat old-fashioned to many wine lovers. Though it clearly has a market, and there’s presumably not a great deal of pressure to change.

There are exceptions to this generalisation, or partial exceptions, but exceptional is what they are.

If the market isn’t prompting changes, what about the rising generation within family wineries? Surprisingly, perhaps, there’s not much evidence thus far of a youthful impatience to follow the trend to greater freshness and lightness. Boschkloof, arguably, where young Reenen Borman is lightening up to an extent (with dad Jacques clearly not unsympathetic), but change as yet is mostly to wines not in the main range, and obviously to Reenen’s own Ron Burgundy range.

Elsewhere, as the younger generation takes over, things stay much the same – so far. Is that at least partly because the older generation is still exercising important ownership control, I wonder? Danie Steytler Jnr at Kaapzicht has his modern-style Cinsaut, but the new Cab Franc is as ripe and oaky as we’re used to from this estate. Anri Truter seems as devoted to pinotage as dad Beyers, in customary big, opulent style. At Neil Ellis, next-generation Warren has been there for a decade, and there’s nothing to suggest he’s chafing at the bit to usher in a 21st-century aesthetic. 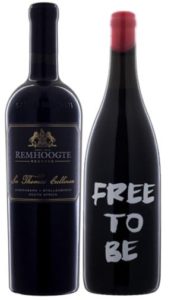 Young Chris Boustred at Remhoogte has been winemaker not quite as long as Warren. The excesses of the estate’s Michel Rolland-influenced past are over, happily, but Chris’s reds are big, ripe and youthfully oaky. And good – please let it be clear that I’m not denying that, nor am I saying that there needs to be more fundamental change in Stellenbosch reds any more than in Napa, though personally I might prefer it. It’s interesting at Remhoogte, though, that Chris has, with the 2016 vintage, introduced a small new “Free to Be” range, with a Carbonic Syrah and an Orange Chenin Blanc. How fully convincing they are is, maybe significantly, another story.

Again, this seems like a way of perhaps letting off some new-wave steam while the main engine trundles ahead on the established tracks. Jancis in her article writes of being “particularly intrigued by wine professionals who now find themselves offering two very different styles of wine”, though she’s apparently talking on a larger scale than a family cellar, and instances the American international group Jackson Family Wines as an example.

I suspect we’re going to see more of this bifurcation of styles occurring within individual wineries, as signs of lurching towards change – or perhaps it’s simply to widen appeal to different sets of drinkers. But if change is coming to Stellenbosch reds, it’s coming very, very slowly. Perhaps this duopolistic wine world is here to stay: both Swartland and Stellenbosch. And why not?