The 2012 vintage of the flagship red blend from Stellenbosch property Alto has just been released, and to mark the occasion, a tasting of this and the two previous vintages to date, namely 2007 and 2011.

Unfortunately, the 2007 which is available from Vinoteque.co.za at R1 144 a bottle is not looking good – a blend of 67% Cabernet Franc and 33% Cabernet Sauvignon and matured for 24 months in 100% new French oak, it’s shows pronounced pyrazine character plus a certain earthiness – it rated 82 on the 100-point quality scale in the recent 10 Year Old Wine Awards. 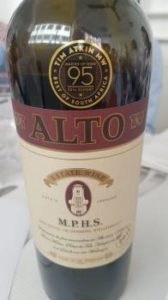 The 2011 (price: R925 a bottle) is in marginally better shape but not much to get excited about – a 50:50 blend of Cab Franc and Cab, it was again matured for 24 months in new oak, the alcohol clocking in at 14.93%. It manages to be big yet simultaneously angular, the acidity tart and the tannins astringent. Rating: 86/100.

Current winemaker Bertho van der Westhuizen, who previously worked at Boschendal and Kleine Zalze, took over from his father Schalk in 2015 and seems keen to introduce a paradigm shift, acknowledging in particular that greater freshness in the property’s wines would be no bad thing.

In this regard, the soon-to-be-released Alto Rouge 2015 was also on show and is the best this crowd favourite has looked for a while.

A blend of 34% Shiraz, 23% Cabernet Sauvignon, 21% Cabernet Franc, 17% Merlot and 5% Petit Verdot, it was matured for 18 months in a combination of first-, second- and third-fill oak. On the nose, red and black berries, fresh herbs and a hint of vanilla. The palate is fruit forward in the best sense – luscious and smooth textured. Not super-complex but immensely likeable. Rating: 87/100.

Can the South African wine industry scale? Is it capable of producing a 100 000-case wine that consistently rates 90-plus on the 100-point scale according to most commentators? During the 1950s,...

All very fine but perhaps the most thought-provoking was the Alto Rouge 1973. What would the blend have been? Not much to go on but it appears that it might...

What’s striking about the Shiraz 2013 from Alto in Stellenbosch is just how South African it is; not Rhône or Swartland aping Rhône but South African on account of a...