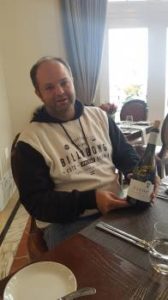 Winemaker Rikus Neethling  founded his own label Bizoe in 2008 and has over the years gained acclaim both locally and internationally for his Semillon-Sauvignon Blanc blend (called Henriëtta after his mother) although it has tended to go somewhat uncelebrated by the Winemag.co.za panel, the 2014 vintage rating 85 when tasted in September 2015 and the 2015 rating 87 a year later.

In an effort to change my perception of the wine, Neethling presented a vertical tasting from 2013 to 2016 and I confess to a better understanding of his intentions as a result. He’s particularly taken with the age-worthiness of Semillon and as a result the blend is typically 70% this variety sourced from GlenWood in Franschhoek plus 30% Sauvignon Blanc from various locations over the years.

Stylistically, Hënrietta doesn’t have the polish of the Director’s Reserve White from Tokara or the finesse of similar wines from more maritime locations like Constanta or Elim but what it does have is bags of character and being Sem-led, it does seem to mature very well.

The 2014 is looking particularly impressive right now with notes of naartjie, lemon and peach plus a little fynbos. The palate shows pure fruit and zippy acidity, the finish long and dry. Neethling says he put a quantity forward for sale at this year’s Nederburg Auction but it wasn’t selected with the result that it’s currently available to the general public at R295 a bottle.

1. Sadie Family Wines Columella 2015 Since the maiden vintage 2000, Eben Sadie has been refining his vision regarding a wine which might be regarded among the world’s greatest but...

“I couldn’t get a job I really cared about,” says Rikus Neethling. So in 2008, when it was still not very much the norm for winemakers to do their own...

From the October issue of Business Day WANTED: Winemaker Rikus Neethling, who founded his own label Bizoe in 2008, moved to Croydon Vineyard Estate between Stellenbosch and Somerset West in...