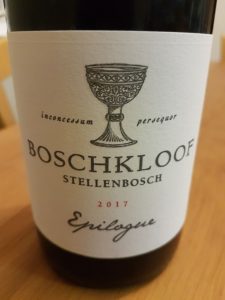 The end of the beginning.

Is every subsequent vintage of Epilogue Syrah from Boschkloof as made by Reenen Borman destined to be measured against the superlative 2014? The 2017 has just been released, and while it is once again hugely impressive, it doesn’t provide quite the same revelatory experience that the 2014 delivered when it first appeared on the scene and effectively rebooted expectations concerning what might be expected from modern Stellenbosch Syrah.

Winemaking for the 2017 involved 20% whole-bunch fermentation before maturation lasting 14 months in 400-litre barrels, 20% new. The nose shows slight reduction before red and black fruit, some earthiness, pepper and spice. The palate is dense, rich and smooth textured. It has a great core of fruit to go with chewy tannins and it comes across as quite forceful (alcohol is 14%) at this very early stage of its life. Wine Cellar price: R765 a bottle.

Why has Epilogue Syrah from Stellenbosch property Boschkloof been such a stellar success in recent times? Upon reviewing the recently released 2018, I’m given to think it’s because it manages...

Delaire Graff, as the producer of the highest-scoring wine overall, received a bottle of GS Cabernet 1966 worth approximately R30 000 from Amorim Cork. OVERVIEW 2010 was a testing vintage...

A slight label revamp for the 2019 vintage of Kottabos Chenin Blanc from the Bormans of Boschkloof, a nice touch being that credit is given to growers Jozua Joubert and...