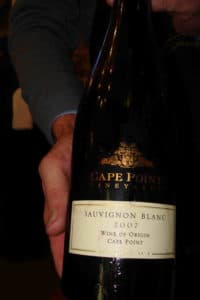 Needing an end-of-day palate cleanser recently, we popped into Caveau in Heritage Square, Cape Town. The establishment continues to run its “Vintage Wine at Vintage Prices” promotion and when we saw Cape Point Vineyards Sauvignon Blanc 2007 at R170 a bottle, our minds were made up.

Among CPV’s many attributes is how age-worthy the wines are and with this being a mere three years on from vintage, I didn’t expect it to show particular development. It was instead the price that made it such an attractive option: the 2009 (labelled “Reserve” but otherwise the equivalent wine) currently sells for R125 a bottle from the tasting room.

We were going to remain thirsty for a while longer however, as the wine appeared flat and dull on first sip, and I concluded that we had a case of random bottle oxidation. Sending vino back in local establishments can be awkward as restaurateurs make you feel as if you’re being unduly difficult, but all credit to our Caveau waiter who opened another bottle without demur and it was indeed as fresh as a daisy.

Later, I contacted Cape Point Vineyards winemaker Duncan Savage regarding his current thoughts on the most appropriated closure for his wines and he replied that from the 2010 vintage onwards, cork will be favoured for white blend Isliedh and the 100% wooded Sauvignon Blanc Reserve, but the standard Sauvignon Blanc (largely unwooded and with a dash of Semillon) is going to be bottled under stelvin.

Duncan Savage describes 2018 as a “solid” vintage, saying of his white wines that they are “a touch more linear” than 2017 and of his reds “a touch more vinous...